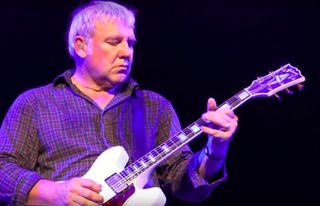 Minnemann, who is best known for his work with the Aristocrats and who has also collaborated with the likes of Joe Satriani and members of Dream Theater, made the announcement on his official Facebook page, stating:

"Working on a new collaborative release together with Rush’s Alex Lifeson. Watch this space for more details to follow soon."

Lifeson and Minnemann have worked together before, on the drummer’s 2017 album Borrego.

As previously reported, Rush will release an expanded edition of 1978’s Hemispheres on November 16. The set is the latest offering from UMe/Anthem/ole label group’s extensive Rush 40th anniversary album series.

Said Lifeson about the record, the band’s sixth studio effort: “Hemispheres was one of our most challenging and demanding records to make. From its inception in a Wales farmhouse where it was written over a four week span to the very difficult mixing sessions in two London recording studios, it stands as a key transitional album in Rush’s long recording history.”

Hemispheres can be pre-ordered here.