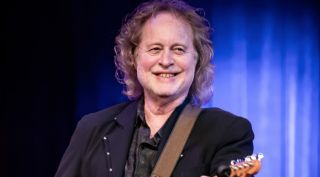 Steve Ripley, leader of the country-rock band The Tractors and inventor of the Ripley Stereo Guitar, has died at the age of 69. Ripley died peacefully at his home in Pawnee, Oklahoma after a year-long battle with cancer, his publicist said.

A mainstay of the small-but-vibrant music scene in Tulsa, Oklahoma, Ripley played guitar with Bob Dylan and JJ Cale, and produced records by the likes of Roy Clark and Clarence "Gatemouth" Brown, in addition to his critically acclaimed, Grammy-nominated work with The Tractors.

Ripley also made a lasting mark as the inventor of the Ripley "stereo guitar," which quickly found its way into the hands of Eddie Van Halen (most famously on Van Halen's “Top Jimmy"), Ry Cooder and Dweezil Zappa.

Ripley and Van Halen also hit it off personally, forging a close friendship that would last until Ripley's final days.

“For more than 35 years I’ve been fortunate to call Steve Ripley one of my true friends,” Van Halen said in a statement. “Steve is many things. Part genius, part musician, part inventor and many other great things, but my favorite thing about Steve is the wonderful, kind, humble human being he is and always will be. I love Steve with all my heart and am proud to know him.”

Ripley is survived by his wife Charlene, two children and grandson, Mickey. Our thoughts go out to his family and friends.