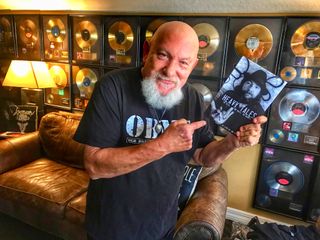 BackStory Events and Guitar World invite you to join us for the live stream of our exclusive interview with the godfather of thrash metal, Jonny Z.

The interview will take place at 7:00 p.m. EST this Thursday, October 24, live from The Cutting Room in New York City.

We'll sit down with this metal industry legend and MegaForce Records founder to launch his new autobiography, Heavy Tales: The Metal. The Music. The Madness – As Lived by Jon Zazula. Jonny Z has released and worked with a who’s who of metal including Metallica, Anthrax, Testament, Overkill, Ace Frehley, Vio-Lence, Ministry, Blue Cheer, Venom, Mercyful Fate. S.O.D., Exciter, Manowar, Raven, KINGS-X and more.

The interview is part of the BackStory Events online series and will be live streamed by Guitar World magazine. Join the party!

For more, head over backstoryevents.com.

The video will appear below once we go live.