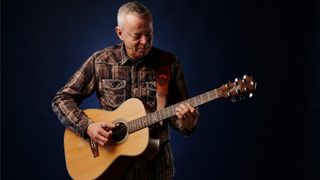 It's hardly a novel statement - or, for that matter, one that’s much open to debate - to say that Tommy Emmanuel, Certified Guitar Player (according to Chet Atkins, at least), is one of music’s greatest acoustic guitar fingerstylists.

But when it came to his latest album, The Best of Tommysongs, the 64-year-old Australian artist was less concerned with technique and more preoccupied with tunes.

“Rather than trying to focus the world on my abilities, I felt I’d rather have people pay attention to the importance of melody and groove and telling a story,” Emmanuel explains. “So I think the focus of this album is on my songwriting.”

Indeed it is. The Best of Tommysongs is, quite literally, a compilation of Emmanuel’s finest and most beloved compositions from the past 30 years or so of his career, all of them re-recorded and, in some cases, updated with new arrangements to reflect how they’ve evolved through live performance over the years as well as Emmanuel’s current musical state of mind.

In addition to much-loved tracks like Angelina, a lyrical, harmonics-laced composition that first appeared on Emmanuel’s 2005 album, Endless Road, and Halfway Home, a driving and nimble alternating-bass number that sounds like Chet Atkins sitting in with the Beatles, The Best of Tommysongs includes five new instrumentals that demonstrate why the New South Wales native maestro is more or less without peer in the acoustic fingerstyle world.

The highlight of these would undoubtedly be the track Fuel, an energized, acoustic tour de force that incorporates elements of Mason Williams’ Classical Gas into a composition in which Emmanuel traverses every inch of his Maton TE Personal Custom’s fretboard to intricately weave bass, rhythm, melody and harmony together in a single breathtaking performance.

And to be sure, the songs you will hear on the new album really are literally performances. “I did the whole album, 26 songs, in two days and one morning,” Emmanuel goes on to tell us.

“And I would have to say at least 90 percent of the songs were one take. But you know, I had just finished a tour when I went into the studio, so I was in good shape to do it.”

As for why he decided to name the album Tommysongs? “I got the idea from Jerry Reed’s song, Reedology,” he says. “I thought, What a great idea. Because the title is telling you, ‘This is how I write. This is my sound. This is my voice.’

"I find that the older I get, the more that all seems to come naturally. But it’s taken a lifetime to get to this point.”

Did the process of re-recording (and in some cases radically rearranging) songs from your back catalog for Tommysongs reveal anything new to you about your musical self?

"It taught me to appreciate the work that I’d already put in. And this is not an ego-driven statement. What I mean is, it was a beautiful surprise that when it came to playing these songs I realized, “Wow, I really love these songs, and the amount of work that I put into writing them was well worth it. Because when I play them, there’s nothing that I think is missing.

"The time I spent writing them came from a very deep place, and I’m glad I went that route because after all these years, I’m still in love with these songs. So it was kind of nature’s way of affirming to me that I’m heading in the right direction, and that I’m doing what the universe needs me to do.

"That’s a great feeling of accomplishment, like, 'Yeah, okay, you can have some ice cream now!' [Laughs]

"I remember reading a book on Muhammed Ali and it said that every time he won a fight he would have a bowl of ice cream afterward, just to reward himself. There’s something symbolic about that: you worked for it, you achieved it, now have your ice cream!"

I love the version of Halfway Home that you do on the record.

"It’s one of my favorite songs that I’ve written. Sometimes I open my show with it because it’s a really, 'Hello everybody, this is who I am,' type of song. It’s introducing the listener to my inner-self, somehow.

"I love it deeply and so I wanted to record it again, but in a different key. I wrote it originally with a capo on the third fret, and I’m playing it in F. The version that’s on the new album is in E flat, with the capo on the first fret. It has a certain brightness to it.

"And it was purely just an instinct thing. When I put the capo on the first fret and played it, I said, 'That’s where I like it - it sounds good down there.'"

As far as the new material is concerned, I’d say Fuel ranks right up there with anything you’ve done previously.

"Thank you. That was an experiment to see if I could write something that created the same kind of movement as Classical Gas has. I wrote it while I was on a train from Paris to Cologne, Germany. When the train left the station I was off. And I had the whole thing together in about an hour.

"I was really thrilled with how that song came out because I did a lot of things in it, like the odd time bars and stuff. I don’t usually do that, but I found a way of being able to tap my foot straight through the whole thing, so the beat never moves, even though the time signatures change.

"As for the title, fuel can mean many things - Hunter S. Thompson said 'We need fuel every day.' And what he was talking about is inspiration. So that’s kind of how I look at it - 'What’s going to lead me to write a song today?' That’s the fuel."

What were the main guitars you used on the record?

"My main one was the Maton I use onstage [the TE Personal Custom]. That’s my number-one axe. For stuff like Halfway Home, I used a jumbo-sized Maton, which we call the Mega Mouse. It has the same wood as my main little one, it’s just a bigger body - not quite as big as a [Gibson] J-200, but pretty close.

"On stuff like (The Man with the) Green Thumb I used my Larrivée C-10, and on some of the drop-D songs I used my Maton Traditional, which is a cutaway model.

"Eric Johnson uses the same guitar. Once he heard me play it he had to have one!

For much of your early career in Australia you played electric guitar and backed a variety of artists on their own music. At what point did you find your own voice as an acoustic fingerstylist?

"I can actually pinpoint it - it was sometime around when I was in my early 30s. I discovered that I had a sound and a voice that wasn’t like other people’s. Even though I may have been playing a Beatles tune or a Elton John song or a Chet Atkins arrangement, it still sounded like me.

"Whereas when I was younger and playing around Sydney I was kind of a gun for hire because I could play like everybody - I could make it sound like Chuck Berry or Andy Summers from the Police, or I could play a solo like George Benson or imitate a flamenco player.

"I wasn’t very good at it, but I could get away with it. I was a chameleon who had a go at everything, and not a lot of people wanted to do that. They were too precious about their own abilities. But I saw the fun in it.

"What changed it was when I got into songwriting. That’s when the person I am evolved and my playing became what it is. And I just kind of relaxed and followed it. I didn’t try to force anything."

Chet Atkins once called you a "fearless" player. What does that mean to you?

"Well, I’m willing to risk everything and jump in and have a go at anything at all. And believe me, sometimes that doesn’t always bring praise from people. Sometimes it brings criticism. And so you’ve got to be careful about how fearless you are with people.

"But I can sit here and say they can eat my shorts anyway, because I don’t really care what they think. What other people think is none of my business, you know?"

You always talk about the fact that your songs are “stories without words.” Is that the way you approach your writing? Meaning, are you thinking more in terms of a full band, with vocals, as opposed to just your guitar?

"A lot of times, yeah. When I write, I don’t think I’m writing just for guitar - I think I’m writing for a band and a singer, so everything has to work for me in my head. The melody has to have a certain course, and the chords underneath create the emotions that go with that.

"But I try not to let the instrument dictate to me. Because when we pick up the guitar our old habits come straight out. You know, our fingers are like dogs - they go straight to the food bowl."

"[Laughs] Yeah. And we don’t want to be allowing those dogs to devour everything. We need to be in charge and tell them where to go!