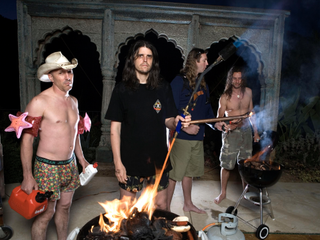 Tool — including Adam Jones [second from left] — have been cooking up their new album for, um, quite some time (Image credit: Courtesy Speakeasy Public Relations & Marketing)

Jones talked about the mountains the band had to move to create the new record, detailed its uncanny concept and discussed everything from his enduring love of silverburst Gibson Les Paul Customs to how his playing relationship with his bandmates has evolved over the past 13 years.

Here's a taste of the cover story. The new issue goes on sale August 13, although a few of them can already be found in the wild, at least according to Adam Jones' Instagram!

With so many years since Tool’s last release, how would you say you’ve evolved as a guitarist since 2006?

That’s a good question! I’ve definitely been practicing more than ever. Since the last record came out, when I meet a guitarist I like, I’ll ask them what they do to warm up or what do they do to stay good. Most of them show me a technique or a stretch — or maybe a practice idea. It’s always really interesting for me to see what they do, and I really try to practice the things these people give me.

The last time I saw Kirk Hammett, I asked and he sent me a video of this forwards/backwards run going up and down the neck of the guitar and it really helped my playing a lot. Instead of doing something like just trying to learn the lead in “Master of Puppets,” I asked what he does to keep himself good, but I think it’s better to learn how someone practices and apply it to your own ideas. I highly recommend it.

How many old silverburst Les Paul Customs do you own at this point? I see you post newly acquired ones on Instagram, and I can’t imagine there are many left.

That’s funny! I remember buying my first one and the guitar salesman really tried to talk me out of it. It was the early Nineties on the Sunset Strip and it was like Guitars R Us or one of those shops where all the guys running it were very pretty, had hairsprayed hair and jeans tucked into their cowboy boots. I have a true love for that color and that guitar in general, and I believe that particular metallic paint does something to the tone or the resonance or the polarity somehow.

Right now I have six actual vintage silverburst Gibson Les Paul Customs and I have some others that people have given me that have been painted silverburst. I bought a couple extra because I used to only bring two guitars on the road, but now we use Drop B for “Prison Sex” and then we tune the guitar down to Drop C for “The Pot,” which is a little easier for Maynard to sing and he can really let go every time.