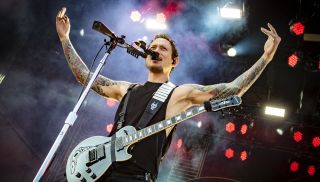 Trivium frontman Matt Heafy has had a busy if somewhat bizarre few months, posting videos of his covers of everything from Britney Spears’ “...Baby One More Time” and *NSYNC’s “Tearin’ Up My Heart” to “Toto’s “Africa” and Celine Dion’s “My Heart Will Go On.”

Now he’s tackled a song from a band that is at least in the same musical world as Trivium—British power metal act Dragonforce’s “Through the Fire and Flame.” Only this time, he’s twisted the shred-tastic original into a cleanly-strummed, earnestly-crooned ballad. And the results are surprisingly awesome.

Check out Heafy’s Dragonforce cover (as well as a few of his other performances) below: