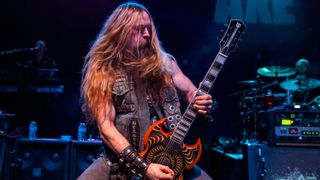 Zakk Wylde once revealed the one song he was never able to nail (it’s Allan Holdsworth’s Letters of Marque, if you’re interested). But the Black Label Society electric guitar player clearly doesn’t have such issues with David Gilmour’s iconic Comfortably Numb outro solo.

In a new Instagram post, Zakk, with Wylde Audio six-string in hand, faithfully rips through the lead in tribute to the Pink Floyd guitarist and singer’s 74th birthday, which took place on March 16.

“MUCH LOVE & HAPPY BELATED BL B- DAY O’ DOOM To The PONTIFF O’ FEEL, MELODY & THE BLUES!!!,” Wylde writes, as only Wylde can, in the accompanying caption.

The former Ozzy Osborne guitarist also paid tribute to 'Son o' the Rooster' Jerry Cantrell on his birthday yesterday - and yes, he nailed that, too. You can watch it below.