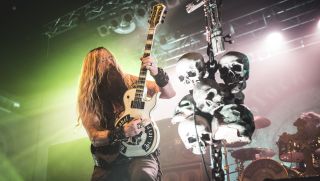 Zakk Wylde recently sat down for a Playlist interview with MusicRadar, and among the many tidbits the Black Label Society leader revealed is the one song he tried to learn to play on electric guitar but was unable to nail. And that song is…

“He’s number one for ‘impossible’ stuff,” Wylde says of Holdsworth. “Allan’s solos were in a language all of their own. Even when you are watching a video of him doing it, what you hear remains unbelievable and mind-boggling.”

Wylde continues, "It doesn’t even matter which song you pick, they’re all completely alien to the rest of us guitar players, but I guess the first album I had was I.O.U. so it would’ve been songs like Letters of Marque that terrified me!”

Despite being understandably intimidated by Holdsworth’s chops, Wylde and the fusion great once shared space on the same track – keyboardist Derek Sherinian’s 2004 song, Day of the Dead.

Though the two guitarists contributed their parts separately, Holdsworth recalled the song in his last-ever interview with Guitar World.

“When Derek was finishing his album, he told me he’d love for me to play a guitar solo on it, so I did,” Holdsworth said. “I recorded a solo for him in the specific length that he requested, and he put it on that track.

“People have told me they really like that guitar solo, but I haven’t heard it in years so I don’t remember it.”