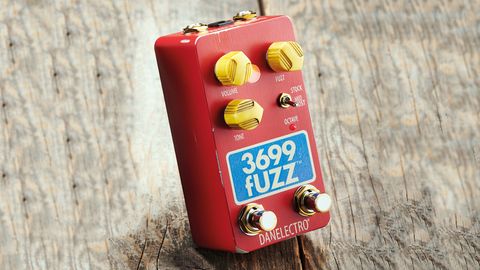 An updated revival of a classic pedal from the guy who designed it in the first place, the 3699 offers some hefty but versatile fuzz tones.

The aim of Danelectro’s ‘vintage’ pedal range, complete with its distressed housings, is to revive the sounds of certain ‘lost’ pedals.

So far, with The Breakdown and The Eisenhower Fuzz, the new additions haven’t named specific pedals, instead dropping broad hints as to which long-lost classics are being emulated, which leaves the sleuthing to us. That policy seems to have changed with the latest in the series.

Danelectro owner Steve Ridinger created the FOXX pedal line in the 70s, and the first of these newbies resurrects what is that company’s best-known pedal, the Tone Machine octave fuzz.

It’s now named the 3699 fUZZ, 3699 being the numbers that represent the letters FOXX on a vintage telephone dial.

We last looked at an official reissue of a FOXX Tone Machine in 2005 when the brand was revived in its original battery-only flock-covered form.

This one, though, puts practicality to the fore in a pedalboard-friendly enclosure with crucial modern accoutrements and an added footswitch for the octave effect (previously on a toggle switch). There’s also a toggle-switched mid-boost so you have the option of filling out the original’s more hollowed-out tone with punchy heft.

Gain-selected NOS transistors have apparently been used to best reproduce the original’s robustly versatile fuzz sound, which can be finely focused here with a wide-ranging tone knob that moves clockwise from thick and sludgy, adding more top-end texture through to an aggressive rasp fest that really cuts through.

The octave here has been rejigged to be more prominent than the original, which might not suit purists seeking the ghostly presence of an upper harmonic, but it does open up a whole extra practical (and footswitchable) range of tones.