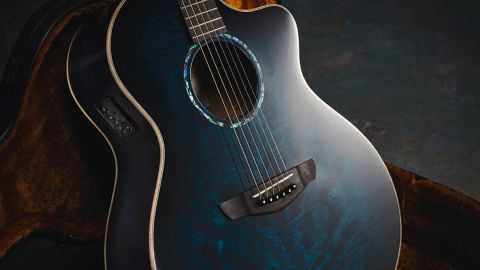 If you're seeking something a little more exotic from your acoustic look and tone, this mango-bodied beauty is well worth tucking into.

With 18 years’ experience behind it and a respectable number of awards to its credit, Faith has built a reputation as a builder of medium-priced quality acoustics that’s embedded in the psyche of players worldwide.

The mastermind behind the design of the instruments is Patrick James Eggle – a luthier who knows a thing or two about guitars, both electric and acoustic, after all.

In the past, Faith has brought us series such as the PJE Legacy, Blood Moon, Nomad and Eclipse and sprouted body shapes that are named after celestial bodies like Venus, Saturn, Mercury and Mars. The Blue Moon Series is the company’s latest theme and the model we have here is a Neptune, a planet from the outer reaches of the solar system and, coincidentally, blue in colour when viewed from Earth.

We like a well thought-out plan… In recent years guitar builders big and small have been experimenting with alternative timbers in order to be environmentally aware and circumvent restrictions on the exportation of traditional timbers such as rosewood and mahogany. So we are becoming used to seeing unusual body-wood formulae appearing in the spec of current acoustic models.

We have to admit, though, that mango is a new one on us. It’s usual that the lesser-known timbers make their appearance as back and sides, or even necks and fingerboards, but for the company to have used mango for both back, sides and top wood, shows a considerable leap of, erm, faith.

Any new character in the dramatis personae of guitar woods deserves an introduction and mango is predominantly Hawaiian, although there is an Indonesian variety, which is what we find here.

Mango can be highly figured, with natural colouring that includes dark brown with streaks of lighter wood and sometimes yellows and greens. Occasional spalting adds to the ornate figuring within the wood, which will have plenty of swirls and curls of its own.

As far as tonal expectations are concerned, luthiers claim it to share many qualities with koa, with a bright tone and plenty of bass present. Naturally, the quality of the wood will vary enormously and so careful selection is necessary when using it for musical instruments.

Faith tells us that “tonally, mango has an interesting character. It is not as loud and punchy as rosewood nor as straightforwardly mellow as mahogany, yet it bears its own distinctive warmth. With frequency prominence starting a little below that of mahogany and dropping off a little earlier in the midrange, the overall tone could be described as ‘dark and moody’.”

We’re not averse to ‘dark and moody’ and so we’re looking forward to bashing out a few tunes in a little while. We may even try a little blues… As we’ve established, the motif with the Neptune is heading towards the mauve end of the spectrum and so the figuring in the mango – present in abundance as far as we can see – is something you have to view at close range.

You don’t have to be too far away before it becomes pretty much invisible, although stage lighting could prove to be a good friend in this respect. Flamed maple binding contrasts the Neptune’s dark side, as does the abalone rosette – it’s a good-looking instrument, even if some of its charms are obscured from general view.

The Faith Neptune’s dark-blue finish all but eclipses the mango wood’s fine natural figuring, which, close up, looks amazing

Used here for back, sides and top, mango is an uncommon tonewood but is highly figured and sonically reminiscent of koa.

’The Neptune’s fretboard is free of position markers save for the Faith crescent at the 12th fret’.

Faith’s body size designation here is a ‘Baby Jumbo’, but at 405mm (15.9 inches) at its widest point and 116mm (4.5 inches) deep at the endpin, it’s a big baby. It’s all in proportion, though, with the graceful cutaway adding to its general bonniness.

Once we reach the Neptune’s neck we’re back in traditional territory with satin-finished mahogany and a fingerboard of ebony, its radius clocking in at 406mm (16 inches).

The only ’board ornamentation is the Faith mother-of-pearl crescent at the 12th fret, and at the other end the Tusq nut measures the standard 43mm. Other hardware includes a set of Grover Rotomatic tuners, a Tusq saddle and a Macassan ebony bridge with matching abalone dotted string pins.

Interested to hear what mango was going to bring to the table, we plunged into the Neptune’s alleged ‘dark and moody’ atmosphere with a few exploratory chords.

Now, we’ve said often in the past that sound is very difficult to describe in words. If you’re not too careful you skid immediately into the more pretentious end of the fine-wine market and begin making some fairly ridiculous comparisons.

What we were expecting was something really quite sombre – dark and moody, remember? – but instead we found a brightness in the treble that was accentuated when using a pick, but more mellowed down when adopting fingerstyle. There’s plenty of bass, too.

In fact, it’s almost as if the Blue Moon wants to be drop-tuned – and so, of course, we obliged. With the bass string dropped to D the party really started, although, if we were being overly critical, we’d say that the Neptune might be a little lacking in the midrange.

It seems that treble and bass are both available in ample supply, but maybe a little more oomph in the centre audio field would liven things up even more.

We were a bit concerned that the 43mm nut might mean that fingerstyle was a bit of a cramped affair for the fingers, but everyone in the office who picked up the instrument was surprised when we offered up the stats in this respect. We came to the conclusion that the depth of the neck at the nut (which is on the slender side) and the generous C profile combine to make the nut feel wider in the hand than it actually is.

Whether this is down to cunning luthiery on behalf of Mr Eggle or sheer happenstance is open for debate, but we didn’t experience any cramping in that region when switching between campfire chords and deft pluckery.

The Neptune is equipped with a Fishman Ink 3 preamp and a Sonicore under-saddle pickup. The advantages here are the low-profile design – no knobs to spoil the guitar’s elegant looks or get in the way of the happy strummer’s right arm – and its simplicity in operation. Flush controls here include a combined push-button tuner and display, plus four rotaries for volume, treble, middle and bass.

The good thing is that Fishman has chosen the range of the EQ very wisely; there is more than ample bass but not so much to allow things to become boomy, and both treble and middle are similarly refined.

It means that any apprehension we had with the Neptune’s midrange could be easily dispelled – we found that taming the treble a smidge, boosting the bass a little and bringing the mids fully into play made a big difference. You certainly wouldn’t have any worries plugging in at a gig or open-mic evening.

There’s no doubt that the Blue Moon has a shelf-load of virtues all of its own. It’s a shame that the figuring of the mango wood is not more prominent, especially on the front of the instrument as it could raise the guitar’s game a little from a kerb appeal point of view.

Mango brings its own characteristics to the picture in the sound stakes, too. We wonder if, like koa, the instrument’s brightness might mellow down given the passage of time and offer the midrange the opportunity to show through.

After all, it usually takes a few years before an acoustic guitar finds its true voice and we suspect this might be the case here. And it might just help the Neptune travel from just ‘moody’ to magnificent.