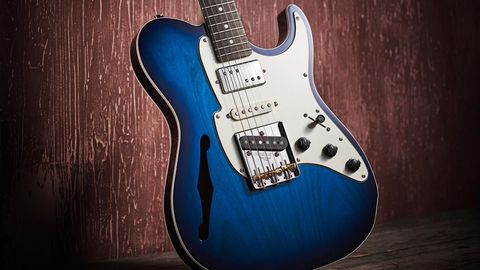 A well-designed T-style with boundless potential for modding that underscores Fret-King's reputation for affordable quality.

Exactly why Fret-King has never hit the big-time is beyond us. The company has consistently produced good guitars, and has always ticked the affordable box at its ‘Black Label’ level.

The brand parted company with its original owner and designer, Trev Wilkinson, in 2018, but there remains no shortage of guitars, now made in India. The current range is certainly expansive, covering numerous classics with the Strat-inspired Corona, the Eclat’s take on a Les Paul and, as here, the Tele-derived Country Squire.

The Country Squire Semitone Special was introduced back in 2013 in a single Green Burst finish with an all-maple neck - a request from Scottish guitarist Ash Gupta to fill a hole left by a long-lost Fender.

We missed it back then, so with a recent announcement of a new Blue Burst version with ebony fingerboard, there’s an excuse to put it through its paces. In short, it’s a very tidy design with an ‘everything but the kitchen sink’ ethos, a sensible price and a decent gig bag. What gives?

As you can see, the cleanly double edge-bound shape itself is a classy, stylized take on the Telecaster with a lightly offset base and a rounder shoulder that flows into a wider treble-size cutaway with a thinner horn. The basic spec info quotes the body as two-piece American alder, which we have no reason to doubt.

Peering through the single f-hole, the slightly rough-finished wood looks like alder, even though you’d be forgiven for thinking the front and back look a little more like ash under that translucent finish.

It’s not immediately clear how much of the body is air, either. Clearly, there’s a cavity under that f-hole, which appears to stop around the waist, although tapping that shoulder suggests another sealed cavity. It seems pretty solid behind the bridge, too, but tapping the body suggests we might have another sealed cavity below the actual control cavity.

Removing the scratchplate, there’s an open route from the tip of the bridge for the neck and middle pickups. One result of this airy build is its light weight at just 2.97kg (6.54lb).

The maple neck is a little different, too, in that it has a heel that slots into the body and extends slightly under the neck pickup, unlike a Fender and more like a PRS. It’s a stable join with zero movement, and the four screws holding neck to body sit in recessed washers. The headstock is noticeably different with its ‘W’ cutout on the treble side and a very steep fall from behind the nut to the headstock face.

We weren’t expecting an ebony fingerboard for this money and with a measured radius of 241mm (9.5 inches) and tidy fretting from a medium tall wire, we’re begin to wonder if we’ve got the price right.

This higher-value perception continues with the Wilkinson hardware: a classic Tele bridge plate with its trio of compensated brass saddles. As you’d expect, it’s through-strung, but there’s the option to top-load, too. The modern-fitting split-post tuners have quite high posts, which suit the deeper geometry of the headstock, although a large string tree is necessary to pull down the top two strings behind the adequately cut synthetic nut.

Noticeably different to the other Country Squire models, our Special mounts the neck and middle pickups, as well as its controls and five-way lever switch, on a white/ black/white plastic scratchplate that’s more Stratocaster in style.

More like PRS than Fender, the neck has its own heel that screws to the body and extends under the neck pickup. A very stable join. The ’board here is ebony.

This is clearly a standard Tele-style bridge, but at least we get compensated saddles for improved intonation. You also have the choice to through-string or top-load here.

The headstock, with its ‘W’ cutout on the treble side, has split-post tuners and features a large string tree.

Straight out of the gigbag this is one very playable guitar. String height is set at bang on 1.6mm treble and bass at the 12th fret. The satin finish neck feels very modern Fender - 21.9mm at the 1st fret and 23mm at the 12th.

There’s a snappy, lively response with a roomy unplugged projection, and the light weight makes for a very comfortable seated player, though there’s a very slight neck-pull strapped on, which is easily fixed with a textured strap.

Pickups are all by Wilkinson and control-wise we have a Strat-style five-way pickup selector, master volume and a master tone - all standard stuff. The lowest rotary control is called a Vari-coil, which adds to the fun.

In bridge position, then, we have a flush-pole Tele-style single coil, which is tapped. In full coil mode we have a measured DC of 9.51kohms; when tapped by the Vari-coil we lose about a third of the wire resulting in a DCR of 6.59k. At the neck is what looks like a Fender Wide Range humbucker, but it is in fact Wilkinson’s vintage-spec humbucker with a measured DCR of 7.05k. When the coil split is activated by the Vari-coil control, the inner bridge facing coil is voiced with a DCR of 3.57k.

Oh, and there are no tricks on the middle over-wound (6.96k) single coil, which isn’t wired to the Vari-coil.

How you drive the Special is really up to you. We started with the Vari-coil fully anti-clockwise voicing the thinner sounds of the neck and bridge. There’s plenty to explore, although the five-way is giving us very Strat-style voices clearly informed by the chambered body construction.

That middle single coil is a good place to start and a good place to get used to the slightly bass-like percussion and snap of the guitar. The middle/bridge mix is certainly very Strat-like with texture and bounce, while the bridge alone has a definite Tele character with crispness and twang in spades.

The neck’s single coil actually sounds more like a Tele’s with a little extra clarity, rather than the woodier and more percussive voice of a good Strat. But turn the Vari-coil fully clockwise and it’s like you’ve hit a ‘big’ switch.

The full neck humbucker has a thick voice with just enough clarity for clean chord definition. The untapped bridge is noticeably louder and punchier, certainly enough to tip a clean channel into hairy crunch.

Typical of Fret-King, this guitar brings a little extra to the table in both design and sound potential. There’s no country of origin on the guitar, but we understand that it’s been made in a modern factory in India that’s already attracting interest from many bigger brands.

That doesn’t surprise us - it’s a tidy job. That said, the taper on that Vari-coil doesn’t quite work as designed, and it’s a shame we can’t voice bridge and middle pickups, Tele-style. But at this price, a little modding could go a long way if that’s your bag. Trev Wilkinson may no longer be involved in the design of the Fret-King guitars, but he has left quite a legacy - as this Special proves. Here’s hoping the brand continues to move forwards. Definitely worth a look.

For more information, head to Fret-King.