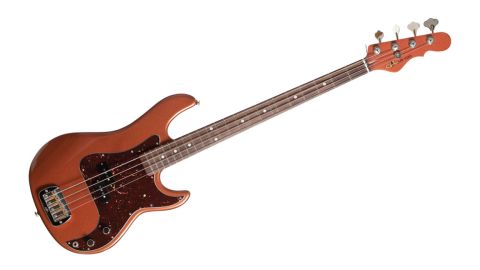 The G&L LB-100 is a traditional P at its core, optimized in a non-obtrusive way. An affordable US-built alternative with a glorious legacy.

It’s safe to say the Fender Precision is the most-copied electric bass of all time. While sheer longevity is a factor, it is also a simple case of demand—the P-Bass is the sound that launched a thousand hits, and no gigging bassist’s arsenal is truly complete without one.

Obviously, Fender still makes myriad variations; high-end builders elevate this noble workhorse to show-horse status; and the market is cluttered with knock-offs that range from junk to indistinguishable clones. But of all the companies building P-wannabes, only one has an indisputable claim as heir to the throne: G&L Musical Instruments.

Founded in 1980 by Leo Fender and George Fullerton, G&L basses and guitars were the last works the great inventor left us, and G&L’s “L” basses (such as the L2000 and L2500) have become almost as coveted as his first bass, the Precision.

G&L first introduced this instrument in 1992 as the Legacy Bass, in tribute to Mr. Fender when the company was acquired by its current owners, BBE Sound. But the name was already being used by Zon Guitars, so it became the LB-100, leaving behind only a small production run of instruments with the name Legacy.

lthough discontinued in the late ’90s, the LB is back in the G&L lineup, with a few updated features. The body is immediately recognizable as a P-Bass, but the LB-100’s cutaways go a little deeper, with the bottom one being a bit wider for better clearance.

The LB-100 can be ordered with an alder or swamp ash body (alder as reviewed), a choice of six neck profiles, four fret sizes, three fingerboards, and a wide range of colors and finishes. The review instrument had an alder body with a stunning Spanish Copper Metallic finish (with matching headstock), a rosewood fingerboard on G&L’s No. 11 neck (1.625" nut width, 7.5" radius with a light tint satin finish), chrome hardware, and tortoiseshell pickguard.

The split-coil Alnico V pickup was configured by G&L designer Paul Gagon to match the specs of the vintage pickups he measured during his tenure at Fender’s R&D department in the 1980s. The pickup placement and its construction yield predictable results—it sounds like a P-Bass.

True to form, the LB has 20 medium jumbo frets, and the Plek process (applied to all U.S.-made G&Ls) makes for a perfectly groomed playing field. The No. 11 neck is similar to the ’70s Fender “B” neck: round in the back, with a slightly narrower nut width that allows you to sling it low, monkey-grip the neck, and still reach the E string.

G&L supplies all of its basses with custom Ultralight tuners with tapered aluminum posts, and the Saddle Lock bridge with chrome-plated brass saddles. The bridge plate has a metal footer deeply embedded in the end grain, aiding vibration transfer to the body; in tandem with the locking saddles, this gives the LB major sustain and note clarity.

With a fairly standard set of specs and build parameters, I wasn’t surprised by the LB-100’s basic P nature. The chunky split-coil pickup has an authoritative bark and a nice, tight bottom.

With the passive tone control wide open and the supplied D’Addario rounds, the bass has some bite as well, but a roll of the knob (and a few sweaty gigs) tames that. It may have been by oversight, or perhaps it jiggled loose in shipping, but upon inspection I found that the-saddle lock screw was not tightened. It was not a major issue; with the bridge saddles uncompressed, the LB-100 sounded like a perfectly good example of the species.

But after I tightened the 2mm screw, the bass transformed into an exceptional example. I’ve experienced this with several other G&L basses, and my take on it is: With the saddles loose, the bass has more of a vintage vibe with less sustain, and a bit more thud. Tightening the screw unifies the vibration through the bridge and gives the instrument more focus and greater consistency—modern characteristics that were bred into the lineage.

I took the LB-100 out for a 12-day tour with an Americana artist, and while I usually play the gig on 5-string, installing a double-stop Hipshot Bass Extender Key set for low D and C meant I could still drop the bomb.

My rig was a BBE BMaxT preamp fed into a Carvin DCM 2000 power amp driving a newly arrived Greenboy Audio F112. The short story on the rig is: transparent, focused, sensitive, and powerful. As the preamp is modeled on the old passive Fender tone stack, I thought pumping a bodacious P through it backed by 1,200 watts (bridged-mono) was a good idea.

The rig’s almost reference-like quality allowed the LB-100 to shine to its fullest; it gave me access to wide range of classic P-Bass timbres with just my hands, and minimal EQ. Slightly opening up the treble on the BBE while playing closer to the bridge brought out a grindy rock tone that would cut through concrete. This Entwistle-like quality was not limited to a few sweet spots—the whole bass growled—but rolling back the tone control halfway brought it right home to a warm yet highly defined tone that blended perfectly with high-energy roots-rock.

With a small low-end bump from the preamp (bass control at 3) and the treble set flat (0), the LB-100 developed Jamersonian tendencies toward fat, round thump, even with a relatively new set of DR Fat Beams. Playing neckward of the pickup with this setting produced corpulent blobs of Shakespearean splat (Robbie, not Willie) that shook the mighty walls of Jericho during our token “white-boy reggae” tune. I’m pretty sure it was the G&L (or perhaps it was the tour stop in Colorado).

While certainly a classic texture, the P-Bass was never my go-to axe for funk/slap. Yes, I know many a great funk line was spanked on the Plank, but with the ones I’ve owned, the pops always sounded a bit jagged to my ear. However, the slap tone on the LB-100 has the clear bark that made David Hungate’s line on “Lowdown” grab your ear, but with a vibrational consistency that responds like a modern funk hot rod.