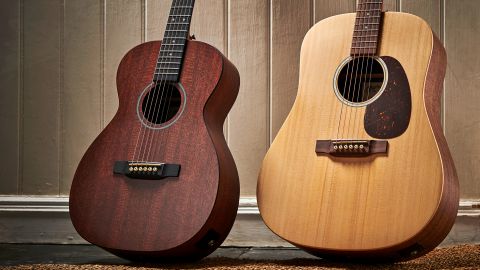 They may be among the most affordable Martins you can buy, but both of these acoustics embody the company's heritage, playability and sound - and that makes them 'must-plays' at this price point.

You don’t need to look far to find good-looking, great-playing and great-sounding acoustic guitars in the affordable end of the market. Brands such as Sigma, Takamine, Guild, Crafter, Tanglewood, Fender, Gretsch, Simon & Patrick, Yamaha and indeed Martin have all impressed with well-made instruments that offer a rewarding playing experience.

The company’s own budget range, the X Series, has been around for a while now. Launched in 1998 with the goal of making more environmentally friendly instruments from composites like the resin-based faux ebony Richlite, and high-pressure laminate (HPL) bodies and necks - at a fraction of the cost of the company’s premium lines - it was a runaway success.

But while the X Series did fulfill its intentions, the instruments looked spartan and some would say lacking in charm; the sound was okay but they weren’t that inspiring to play. Also, as the years zipped by, they seemed a bit basic compared with some of the competition.

But move on a couple of decades and Martin has upgraded its Cinderella range with better tones, improved playability and a dash more cosmetic flair.

We have two models to examine here: the dreadnought sized D-X2E (previously known as the DX1AE) with a solid Sitka spruce top and koa patterned HPL back and sides, and the parlor-bodied 0-X1E (previously 0X2MAE) with figured mahogany HPL top, back and sides.

The faux-grain pattern is printed on, but it takes a keen eye to suss this at first glance. Only on peering inside one notices no wood grain on the inner surfaces, which, of course, you wouldn’t see with solid mahogany or koa. There’s no finish on the bodies, and the necks are, according to Martin, “hand rubbed” with gun oil or some such.

Martin has taken a different approach to the necks of the two instruments. The D-X2E has “select hardwood”, which in this case looks like a mahogany family member (usually Spanish cedar, sapele, or even mahogany itself, depending on availability).

The 0-X1 is a multi-laminate of birch - it’s not particularly pretty, and feels a bit heavy, but is ecologically sound and will be as stable as a rock. The D-X’s bridge and fingerboard are of the Mexican hardwood katalox, whereas the 0-X uses ebony-coloured Richlite. Both have modern D-28-style pearloid dot inlays.

Tuners are enclosed Schaller-style, while both instruments have compensated Tusq saddles, Corian nuts and dotted white plastic bridge pins. The D has a ‘tortoiseshell’ pickguard and pearloid soundhole rosette, while the 0 is bereft of any guard but gains Martin’s pretty herringbone soundhole purfling. There’s no binding anywhere, so the guitars are quite plain, meaning these are welcome touches.

Martin has clearly designed these instruments as grown-up guitars to be taken seriously. Necks are a fingerpicker-friendly 44.4mm (1.75 inches) at the nut, with a fairly shallow Performing Artist profile that tapers from 20mm at the 1st fret out to 22mm by the 12th fret.

Although pretty much identical, the D-X’s larger body size puts the neck a tad further away from the player, whereas the 0-X tucks right in. Actions on both are set perfectly and, whether it’s our imagination or not, these necks seem much more comfy and welcoming than before, with beautifully cut nuts and manageable string-resistance.

As for their sound, frankly it comes as a revelation. The larger-bodied D-X is open-toned, with great string separation and clarity but none of the ‘hardness’ that we felt was there before: “fruity” is how acting editor and acoustic aficionado David Mead described it. It’s equally at home as a fireside picker as it is being tickled or thrashed with a pick, and it would take a player with the ears of a bat to tell you that it was not made from solid tonewoods, or the very best laminated timbers.

With its smaller body size the 0-X is, of course, a tad more boxy in tone, but that tighter, more focused sound responds instantly and projects really well. We can see it working perfectly in a blues setting since it sounds great with a slide, too.

Again, there’s no hint that it’s made from anything but tried-and-trusted materials. Indeed, both instruments stand up well to others costing many times more. Almost in jest we pitted the D-X2E against an £8,000-plus Martin D-28 Authentic and a £3,650 Modern Deluxe D-18.

And while the rosewood D-28 offered a more canon-like delivery and lasting ‘bloom’ on the notes, and the mahogany D-18 gave a typically sophisticated response, in no way did the laminated D-X let itself down.

Sure, it has a Sitka-spruce top with scalloped bracing, but back and sides are essentially pressed paper with printed wood-grain. Yet it acquitted itself impressively in top-end company.

Plugged into the acoustic channel of our 30-watt Yamaha THR-II amp, both guitars sounded like amplified versions of themselves (Martin says the electronics have been specifically voiced for each guitar), the D-X being more open with extended bottom and top, and the 0-X more middle-y and direct.

The Fishman preamp’s jack socket is on a small plastic plate adjacent to the lower strap button; it doubles as easy-access battery compartment, so no fiddly endpin jacks or wrist-chafing forays into the soundhole to change battery. Although no LR Baggs Anthem, it’s simple, sensible and sounds plenty good enough.

Often, when this reviewer has been asked to check out guitars to which he’s previously been a tad ambivalent, a sort of sinking feeling sets in. But just occasionally the smirk is wiped off the face when the instruments work so well that you can only sit back and applaud. And that’s exactly what happened here.

As the owner of three very different Martins (a D-28 Authentic, an OM-28 Reimagined, and a Dreadnought Junior), this player is as familiar as any with how the company’s guitars feel, play and sound. And the expectation here was one of ‘meeting the poor relations’. Well, while that’s true in strictly financial terms, it’s anything but as far as performance goes.

These guitars are as individual in personality as any solid-timbered boutique jobs. The D-X2E does indeed look very plain, but its Sitka spruce top lends depth and authenticity to its tone, while the 0-X has a dark, honky voice that we really liked.

The tweaks that Martin has made to the range mean that, in all other respects than materials and finishing, these low-enders compete favorably with models costing much more. In fact, were we contemplating the purchase of a mahogany-topped 000-15M at £1,350 or so, it would take a lot to persuade us not to save the £800 difference and opt for an 0-X1E.

That said, an all-solid-wood Dreadnought Junior at a similar price to the D-X2E offers a rather different dilemma, but in the end that’s something for you to weigh up. All this aside, in Guitarist we review instruments based on their quality, playability, sound, general fitness for purpose and, of course, value for money.

On all those fronts the D-X2E and 0-X1E deliver with flying colors. And to that we can add some pretty good ecological credentials. It seems that a great guitar maker can make a great guitar out of almost anything, and if anyone knows anything about making great guitars, it’s Martin. Go and try one, and see if you agree.