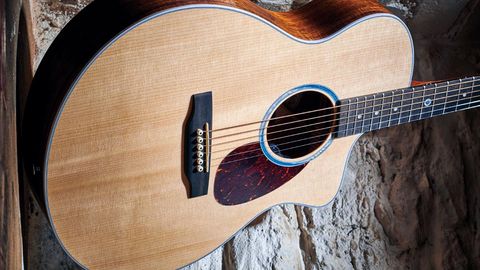 If you’re into making music rather than cork sniffing, here’s a guitar with few – if any – boundaries and a design that’s a huge credit to the art and craft of the luthier.

If you’re a dyed in the wool Martin acoustic guitar fan, you might want to look away. By design, the new SC-13E isn’t for you. “It’s time to rethink what an acoustic-electric guitar can do,” states Martin.

If you’re expecting a guitar loaded with digital images or perhaps the in-built acoustic effects of Yamaha’s TransAcoustic technology, you’d be some way off the mark.

The electro SC-13E does feature the Fishman MX-T preamp, which includes a very neat onboard tuner, volume and tone controls, plus a phase switch intended to maximise bass response at lower volumes and conversely suppress feedback at higher levels.

This is all placed in easy reach just inside the soundhole, which was developed at the request of Martin for its Road Series – but that’s it for any electronic trickery. So, what exactly is the SC-13E?

“It looks like a Taylor that’s been left on a radiator,” quipped an onlooker at the sizeable launch of the guitar earlier this year at the NAMM Show.

And, yes, that’s the first most obvious difference: the new S-shape asymmetric body, a trendy offset if you like, that appears to take Martin’s interpretation of Taylor’s Grand Performer shape and drops its treble side, with it pulling the cutaway to a very un-Martin-like downward-pointing stance.

If that doesn’t have you spluttering, flip the guitar over and that curve of the cutaway is mirrored flowing into the heel, or rather the lack of heel. Says Martin:

“With our patent-pending Sure Align neck system, we removed the heel, providing full access to all 20 frets. No more contorting your hand to reach the high notes. Now you can comfortably play the entire fretboard.”

To put the guitar in context, it sits at the top end of the Martin’s Mexican-made Road Series, and the equivalent conventional model is probably the GPC-13E with its 14th-fret neck join, conventional heel but still with the Style 13 appointments. It also comes with the same Fishman MT-X and a soft shell case.

And just to add a little more confusion, the ‘13’ in the SC’s model name not only refers to that decoration style but also the fact that the neck joins the body at the 13th fret as opposed to the time-honoured 12th or 14th frets – one of the many firsts within this guitar.

The SC-13E’s most radical feature is this Sure Align neck system, which Martin refers to as a linear dovetail joint, “allowing you to get to pieces of the guitar you couldn’t before”. It also features both neck pitch and intonation adjustment – accessed through the soundhole.

The Fishman MT-X electro system was designed for Martin’s Road Series. Along with this easy access battery compartment, there are volume and tone controls, plus a phase switch, all accessible within the soundhole.

Despite the forward-looking design, there’s little decorative embellishment. This ‘Celestial Bullseye’ style inlay is about it and reflects the circular record label inside the guitar.

Part of the Fishman MX-T electro system design is this very handy onboard tuner. Just plug in, switch it on and it mutes your output while you tune, as it should.

Radical modernism aside, the SC-13E sits with the all-natural gloss-finished body of the upper-end Road Series and shoots for a very traditional Sitka spruce top, while the back and sides are referred to as koa fine veneer.

“Some have got confused about the back and sides material,” notes Martin’s international marketing consultant, Steve Harvey. “It’s essentially solid mahogany with a thin – we call it ‘fine’ – koa veneer over the top to give it some bling.”

The body, then, has the simple white top-edge binding with a black/white inner purfling strip, although the back edge is unbound and you can see that laminate koa/mahogany/koa sandwich, especially under a loupe. Through the soundhole, you’ll also see that the outer koa veneer is vibrantly flamed; the inner facing is contrastingly plain.

While you’re peering through the soundhole, you can’t help but notice the back’s X-brace – mirroring the top’s X-brace – surrounded by a circular label that looks like it’s come off a vinyl record.

“We’ve always been an X-brace guitar,” says Martin’s VP of product management, Fred Greene. “Martin invented the X-brace, but it’s always on the top of the guitar and you can never see it: a feature experienced guitar players know about but new players do not. So, we just thought, why don’t we put the X-brace in a place that you could actually see it? Just advertise it and put it out there.

“We experimented with using the X-brace on the back and it didn’t really have an effect on the instrument, sound-wise, positively or negatively: it just looks good. And as a piece of whimsy, and not taking ourselves too seriously, we developed that label that looks like a record label. Just have some fun with it, that was all it was.”

Thankfully, too, the traditional headstock reminds us this is a Martin guitar, as does the bridge. It certainly helps to temper the disorienting feeling of modernism.

Bombarded with all sorts of online media, videos and the like, you’d think this new SC-13E was the second coming. And, yes, while Martin should get the trumpets out, it’s quite a relief to spend some downtime with just the guitar.

Quite a lot of downtime, in fact. Clearly, we were unable to try this on a stage (we’re not sure the outside decking counts), but this is a well-aimed design that has way more scope than simply being our lockdown buddy.

Die-hard acousticists might be a little sniffy, but those of us who just like to play guitar of any variety – electric, archtop or nylon-string – will be more than pleasantly surprised.

Indeed, it’s that latter category that is a good reference, especially the ‘crossover’-style nylon-string that isn’t designed to fill a concert hall. And yet crossover or hybrid guitars, call ’em what you will, can sometimes be jacks of all trades, masters of none, can’t they?

As supplied, the setup chases Taylor’s renowned electric-like playability, and in comparison with a 324ce we’re a little taken aback. Even if you’re not aware of what’s going on with that neck shape, or indeed the fingerboard thickness (see ‘Asymmetric Style’ box above), true to intention it really does feel very comfortable in the hand.

It also seems to be slightly more balanced on the lap with that offset body shape in turn perhaps offsetting any potential neck dive.

But back to the setup here and it’s honestly the slinkiest Martin (new or old) we’ve ever played. It ships with custom light gauge (0.011 to 0.052) Martin Authentic Acoustic Lifespan 2.0 92/8 Phosphor Bronze strings. There’s approximately 1.2mm string height over the 12th fret on the treble side; 1.8mm on the bass. This writer doesn’t set his own electrics that low, certainly on the treble side.

Our Taylor is frankly more regular but still quite electric-like, with its string height measuring 1.6mm on the treble and 1.8mm on the bass side. In terms of depth, the SC-13E’s neck shaves a couple of hairs off the Taylor in lower positions: 20.9mm at the 1st fret, as opposed to the Taylor’s 21.3mm.

If the idea was to create an all-rounder, Martin has pretty much hit it bang on. For conventional strumming and picking, not only is it very engaging, the neck shape feels neither narrow nor wide, over-thin nor thick, and you can say pretty much the same about its voice.

The basses don’t override the mids or the highs; there’s a suggestion of OM or 000 character in that regard, and it certainly doesn’t sound mid-focused or even boxy like a smaller size can.

Yes, we could do with a little more strength on the high E as we move – effortlessly – past the 12th, and we can’t help thinking a little more ‘air’ to the setup would help, especially if you’re hitting hard with a pick.

Depth at the 10th fret is bang on 22mm; the Taylor is 22.5mm. Coincidence or industrial brinksmanship? There is a similarity, but the Martin neck feels less bulky, more electric-like than the Taylor and quite probably the reverse of your expectation.

Swapping between our now rather ancient Martin DC-16GTE, its neck feels skinnier in both depth and width – but, again, it’s dimensionally very similar aside from its slightly narrower nut width.

The dreadnought body has the sort of low-end that’s wonderful around the kitchen table or on a solo piece but can easily overpower a recording, not least with a simple rhythm section playing along. The SC-13E seems almost pre-EQ’d to sit in a band recording.

But, clearly, this is a guitar that’s designed to be played out live – when we have that luxury again. Amplified, for general use, then, there’s little to complain about. That tuner is a handy addition, even though it’s a little slow compared with the faster note recognition of our well-used Seiko STX7 headstock tuner – something to bear in mind if you use a lot of open or altered tunings.

The actual volume and tone could be moved up a little to the waist area of the soundhole, too. Until you get used to it, finding the volume is a little harder than it could be.

And because of the placement of the rotary controls, although ‘up’ is still clockwise, you’re actually moving the control downwards toward the bridge. Do the same with the tone and you have a lovely sparkly mid-scoop; at the other extreme the response is flatter, aimed to sit better in the mix with a band.

So, there’s not a huge range of amp’d sounds, especially compared with Taylor’s ES2 system, which offers a lot more range from its dual treble and bass EQs and is also slightly less piezo-y in terms of the note attack – the SC-13E is marginally less realistic in that regard. But what is realistic when part of the intention here is to run the SC-13E into your electric pedalboard and amp?

Now, that’s not unique to this guitar (although Martin does mention that the offset body with its reduced 102mm/four-inch depth seems to help to limit feedback,   another guitar, not just an acoustic, thanks to the combination of the extended easy access, the low string height and that neck shape.

The trouble is, after playing the SC-13E then going back to either our Taylor or Martin references, they both feel like clunky battleships and that high-fret access – while not for everyone – is a new standard.

As with any heritage brand, coming up with genuinely new designs is problematic. Martin’s conservative reputation, especially when compared with the modernism of Taylor, makes it doubly difficult.

Except, of course, perception is one thing, reality is another, and there’s plenty in Martin’s canon, not least last year’s Modern Deluxe series, that illustrates a more progressive intention. And the SC-13E is certainly that.

Certain elements, particularly the offset shape, might not be to your taste, but rather like Fender’s Acoustasonic Tele and Strat, don’t knock it till you’ve tried it. Overall, it’s such a well considered design that little, if anything, detracts from its purpose: a guitar you just want to play, and with zero adjustment from your favourite electric.

If you’re into making music rather than cork sniffing, here’s a guitar with few – if any – boundaries and a design that’s a huge credit to the art and craft of the luthier.