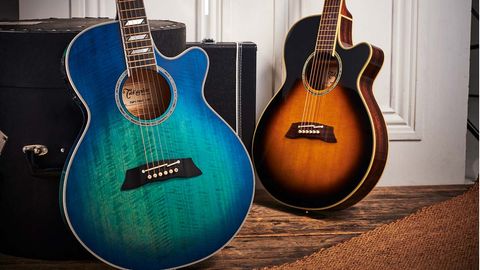 As electro-acoustics go, you would be hard pushed to find two that are more ready for the stage. The shallower bodies and clubby necks offer an electric feel that is a lot of fun to play.

The idea of thinline acoustic guitars is hardly new. In fact, when we first opened the cases and saw this pair of super-slender Takamines we were reminded of Yamaha’s excellent APX range from a few years back. Only these are even thinner. Takamine proclaims that the concept here is to provide “comfort and performance to guitarists seeking a more slender body, uncompromised sound, and excellence on stage”.

Sounds like a good idea to us. After all, not everyone wants to wrestle with a jumbo or a dreadnought on stage. Guitarists who are predominantly Strat or Les Paul inclined might want something that feels a little more familiar in their hands for the one or two acoustic numbers in their band’s set, for instance.

Our two models here, drawn from an extensive range of varying timber combos and hues, might look extremely similar, but the real interest lies in where they differ. For a start, the TSP178AC SBB (which we’ll call ‘The Blue One’ to avoid confusion) is £800 more expensive than the TSP138C TBS (aka ‘The Sunburst One’) and sports an arched maple top and back.

So, are we looking at a cross between a full acoustic and something like a Gibson ES-3 series here? We’d better zoom in and get busy…

Your first question might be, ‘Just how thin are these guitars?’ The Sunburst is a very trim 60mm, but the Blue is the real supermodel at only 50mm – but, of course, we have to take into account that it bellies out owing to the arched top and back. Both are particularly light, too, checking in at only 1.9kg (4.4lb), but from here on in, the spec begins to differ even more.

Taking one model at a time and staring with The Sunburst One, we find a spruce top. Takamine doesn’t specify which type of spruce, but the timber visible through the finish looks like a nice piece of wood, nevertheless.

Back and sides are sapele, a wood we’re finding more and more on acoustics these days as it surfaces from a longstanding and totally wrongful designation as being a cheaper alternative to mahogany. In any case, the guitar’s back and sides look very attractive, set off by white and black binding all round.

It might look and sound like an acoustic, but the feel of it in the hand will make electric guitar players feel immediately at home.

The TSP178A... Ahem! The Blue One, has an ebony bridge with 53mm string spacing.

Both instruments are equipped with Takamine-branded Gotoh tuners.

The collar matches the cuffs on the TSP178AC SBB.

The neck is mahogany with Gotoh gold-plated – and Takamine-stamped – tuners on the headstock, a bone nut and rosewood fingerboard completing the picture. It’s a pretty traditional recipe, you have to admit; we’ll see what the reduced body dimensions bring to the sound picture a little later on.

Meanwhile, we’ll look at The Blue One and find out what makes it tick from a wood point of view. The body, back, sides and even the neck are maple and so it should provide a tonal contrast to the Sunburst. And that’s before we even begin to consider the presence of the arched top and back.

Outside of the electric semis – Gibson ES-335, 330, 345, and so on – we can’t think of that many contemporary acoustic guitars that have arched tops and backs. Obviously, this means that there’s more of a capacity inside, which may result in a slightly larger pair of lungs than its stablemate, but this remains to be seen.

Other than that, Blue sports an ebony fingerboard with a more ornate set of position markers – a combo of abalone and mother-of-pearl, as far as we can tell. Binding and rosette are similar on both instruments and tuners are, once again, Takamine-badged Gotohs.

Both guitars share Takamine’s new CT-3N pickup/preamp system, developed specifically for the Thinline series, that features a tuner, controls for volume, treble, midrange and bass, plus a notch filter to fine-tune everything and give the player a fighting chance to see off the howling feedback beast on stage.

Overall, the build quality on both guitars is exemplary; something this writer has come to expect from Takamine since the brand first crossed his path during the mid-70s. We’re still fascinated by the idea of being able to squeeze out some workman-like tone from such small soundboxes. And the time has come to find out…

The finish on both instruments is excellent: everything we’ve come to expect from Takamine. An attractive abalone rosette adds a subtle touch of bling…

The deep cutaway and playable neck might be a bad influence on you if you are trying to cut down on lead guitar showboating.

Gotoh tuners sit atop a mahogany neck on the TSP138C TBS.

The TSP138C TBS has a rosewood bridge instead of ebony but the string spacing is identical.

If the bodies here are slight and dainty, then the necks are almost the opposite, because both feel chunky in the palm. Don’t get us wrong, it’s good chunky as opposed to early 50s baseball-bat territory.

One other thing that supports our theory this model’s home market will be electric players who want to whip out a few acoustic licks here and there is the nut width. At 42mm, instead of the more conventional 43mm and fingerstyle-friendly 45mm and upwards, the feel here is very electric and the flattish radius of 304mm (12 inches) puts it on the Gibson/modern Fender spectrum.

Picking up The Sunburst One first and playing a flurry of campfire chords, we listened for any boxiness that sometimes accompanies small-bodied acoustics. You’re not going to get the cavernous bass and hearty midrange of a dread out of a body this size, and while there is a smidge of a nasal midrange, it’s really not anything that would bother us too much.

After a while, you don’t really notice it and just get on with the job in hand. The ‘electric’ feel helps with single-note playing, too, the cutaway offering access to your wildest melodic imaginings. And the weight is very good for those moments when spotlight posing becomes an absolute necessity.

Over to The Blue One and a quick side-by-side comparison proves that the arching of the top and back means we have slightly more volume and, if we’re not mistaken, a smoother mix of treble and bass, with an improved midrange.

It’s subtle, but after lots of swapping about between the two, we’re sure it’s there. There is more of an openness to the sound; it’s more breathy. An all-maple body could quite feasibly have the edge on a more traditional spruce and sapele combo in this respect, after all.

But what about that “excellence on stage” we were promised? That’s all down to the CT-3N pickup/preamp and, firing it up, we found that while all the preamp controls had an effect on the sound, the midrange offered the most mileage towards getting a satisfying stage sound. Boosting the bass will add weight, but fiddling with the midrange will give you additional girth.

Basically every stage sound situation is here, save for a fingerstyle soloist who might want the natural roundness offered by, say, an OM or 000 acoustic. For everyone else, it’s party time.

We like what we’ve heard from Takamine’s Thinline acoustics, despite a slight worry that the Blue is maybe priced because of a more complex build-process rather than its ability to deliver £800 more in terms of tone or playability.

Having said that, what’s there from a pure acoustic point of view is a step up from what The Sunburst One has to offer… but at a cost. It sounds like we’re griping and we’re really not: both these guitars are fun to play – everyone who picked one up during the course of this review said as much – and their appeal grows as you spend more time with them.

As onstage guitars, these models would deliver stiff competition for other electro-acoustics out there on the market, and their homely feel for electric players lifts them clearly into an altogether different league of usefulness. We’re convinced – and we think you will be, too.