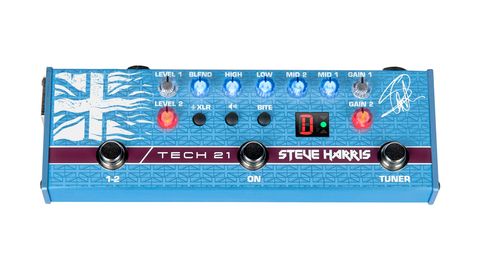 Fulfilling its claims admirably, the SH-1 is ‘Maiden’ heaven.

We’re self-confessed SansAmp champions here, having been consistently impressed by the range over the years, but that doesn’t mean we let their makers, the veteran amp-modelers Tech 21 NYC, get away with anything less than the very best. After all, they’re charging a fair chunk of change for their units, and they also make some pretty big claims - not least, in the last year or two, promising to make your bass tone resemble that of Dug Pinnick and Geddy Lee.

The fact that these claims have proven to be entirely true (see our blown minds in the relevant reviews) have only made us more stringent when we come to their latest product, the signature SansAmp belonging to our cover star Steve Harris of Iron Maiden.

We’re presented with the usual super-high manufacturing standards when we unwrap the SH-1, as indeed we should be for around £300. The unit comes in a plastic-protected metal box and is accompanied by a power supply with replaceable prong attachments for three continents - a godsend, if you ask us.

We’re constantly whining to manufacturers about their failure to include a power supply, and don’t for a minute buy their excuses about the extra cost being prohibitive. Plug in and you’re presented with two channels, both of which are served by the same four-band EQ and blend control, but which have dedicated level and gain pots.

The most obvious use of this feature is simply to roll on the level on one of the channels and use it as a boost for your 128-bar tapped solo in the middle of Rime Of The Ancient Mariner, but that would hardly justify the financial outlay. A more

rewarding option is to engage the ‘Bite’ switch - the secret sauce that transforms your tone from ‘weekend covers band in local bar’ to ‘stadium-dominating heavy metal legend’ - and alternate between the ‘Steve channel’ and the ‘You channel’, so to speak.

Make no mistake, as with the Geddy and Dug SansAmps, you will laugh your head off when you engage the Bite switch for the first time. No matter what EQ you send into the pedal, what emerges is that clanky, hollow, fingernail-y sound that Harris has been deploying on the planet’s biggest stages since 1980.

It’s instantly recognizable, assuming you have the remotest interest in Iron Maiden’s music and have at least a passing familiarity with the bass tone. Of course, you don’t have to be a Maiden fan, or even a metal fan, to use and enjoy this unit - it has a stack of EQ options that cover a lot of ground, tonally speaking.

Add to all this a series of useful features - a chromatic tuner, a ‘speaker defeat’ option if you wish to remove the SansAmp’s emulated cab sound from the tone, and an XLR out with ground lift for sending to a PA desk or studio board - and you’ve got quite the package.

The booklet even includes EQ layouts for anyone looking to emulate tones from Lemmy, Phil Lynott, Cliff Burton and other bassists of the headbanging persuasion. We’re convinced.