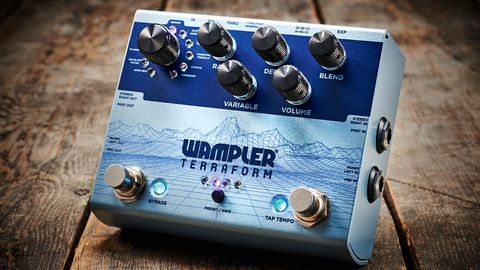 It’s taken a while for Wampler to come up with a modulation pedal, but it’s been a worthwhile gestation period because the resulting Terraform has a feature set with great utilitarian appeal.

The pedal follows the now-established genre (Strymon Mobius, Boss MD-200, Eventide H9…) that puts a whole bunch of modulation effects in one place, so you have a choice of many while saving on pedalboard space and power outlets.

As such, the Wampler delivers 11 different modulation effect types in a compact twin-footswitch chassis that’s about the size of three nano-sized pedals side by side.

Operation is designed to be simple with no menus, just five knobs to tweak the effect and a straightforward Tap Tempo. There are eight onboard preset slots and both mono and stereo operation is supported, but there’s also a facility onboard to split the mono signal chain so some effects can be in front of your drive section and others after it.

The array of effects types here is quite possibly the most pragmatic we’ve yet seen in a pedal of this type – nothing outlandish, but the selection is well chosen to cover a host of modulation eventualities.

The only mainstream one that’s absent is a dedicated vibrato, but since you can dial in vibrato by turning the Blend of the chorus effect up to 100 per cent wet, that may not be a dealbreaker for you.

Setting up sounds is quick and easy, and you can save your favourites to the eight onboard presets for recall when needed. Presets are scrolled through and loaded with a press on a small black button that, midway between the two footswitches, can actually be operated by foot if you’re careful.

At the top side of the enclosure you will find a pre/post switch. Set this to Normal for basic mono or stereo operation. Set to Pre Post it assigns individual effects into specific places in your mono signal chain.

The Terraform can be run in mono or stereo.

The recommended method, however, is to use the Tap Tempo footswitch: holding it down for about three seconds puts it into Preset mode, and it can then scroll through and load presets.

Annoyingly, though, if you’ve selected a preset to use and then want to use Tap Tempo with it, the necessary press-and-hold action will advance to the next preset before reverting to Tap Tempo mode.

If MIDI control appeals, you can map presets to any program change number. An expression pedal can be assigned to any of the five knobs and stored within a preset.

The quality sounds include two types of amp trem: traditional sine wave and the more phase-y harmonic style, with the added bonus of square wave on/off at the extreme of the Depth knob. Two classy choruses, a nice crisp flanger and a phaser, plus a suitably gloopy U Vibe cover several decades of time-based effects alongside a Rotary effect implemented with a flexible parameter set.

Here, you can set a blend between horn and drum, set separate max speeds for each, and use the Tap Tempofootswitch for Slow/Fast switching; the Variable knob sets the ramp speed. It’s authentically spacious and just needs some drive added for that Leslie growl.

Next, you can get your funk on with the dynamically controlled Envelope Filter, capable of quacky single notes and synth-style sweeps, while the Autowah with Tap Tempo will keep you in the groove; both have parameters to ensure the effect can be as subtle or as deep as you want.

Finally, attack envelope manipulation with Auto Swell will appeal to fans of the Boss SlowGear and psychedelic backwards guitar.

Versatility is vastly increased by the rear panel switch for changing from normal operation to placing effects either before or after dirt – implemented by connecting a drive pedal from the Pre Out to the Post In sockets, or using the four-cable method with the Post Out and Post In sockets connected to your amp’s effect loop.

As shipped, the pedal has defaults for which effect is to be used pre or post, but you can easily change those global assignments. Even better is that, disregarding global assignments, you can allocate an effect to pre or post in different presets – typically, classic rock fans could have presets with U Vibe before or after dirt.

As a versatile collection of easily tweaked effect types in a not-too-large footprint, the Terraform has plenty going for it, but that pre/post operation is the bonus that will no doubt see many players making space for this one on their ’boards.