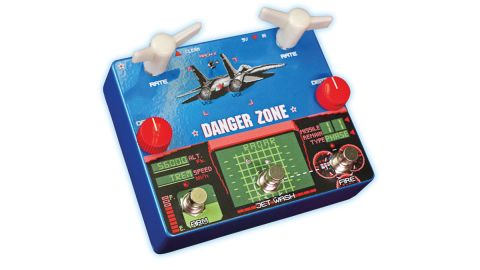 A fun yet intuitive design that won't require an elite education at a fighter pilot school, and it'll open up a whole world of vintage analog tremolo and two lush phase voices.

“Gonna take you right into the danger zone…” Did I just put that song from Top Gun in your head? Yeah, I couldn’t resist, because that’s exactly what I was humming when I decided to pilot myself into the Danger Zone – a colorful two-in-one effect pedal from Wingman FX.

But before you dismiss its retro video-game-console looks, everything about the Danger Zone is designed for complete control and engaging functionality, not to mention the fact that its interactive tremolo and phaser effects can be set up for over-the-top chop and sweep or dialed back for more stealth-like modulations.

Danger Zone is handbuilt with analog circuitry and features separate Volume, Rate and Depth controls for the tremolo and phaser effects.

The Rate joystick controls are actually the company’s popular “WingMan” foot control knobs, and the Depth controls are rubberized and located on either side of the pedal so you can manipulate them with the edge of your foot. The mini-Volume controls are transparent so you can see the red-LED illuminating the pulsing rate for each effect.

Taking off with the Danger Zone will cut a wide swath of dramatic effected color for the tremolo and phaser, and when combined, both effects can be calibrated to sound wildly unrestrained. The tremolo is intense in its mostly square-waved stutter, but can be tamed by reducing the Depth knob to get a clearer triangle waveform.

A real plus is having separate volume controls for each effect so you can boost them or subtly tuck one in the background. The phaser, much like the tremolo circuit, is extreme in its sweeps and swooshes, and sounds best when the Depth and Rate controls are used judiciously.

Using the Jet Wash to toggle between the vintage/modern settings changes the alignment of its phase shifting for softer swirls or rapid staccato knock, and flipping the Mach II switch really does add more vigor to the phase tone.

They say fighter pilots thrive in a turbulent world of 360-degree turns, and you know what? That’s kinda what the Danger Zone sounds like.