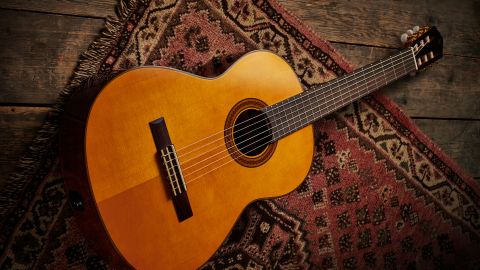 The Yamaha CG-TA TransAcoustic is a next-level classical guitar with TA technology that makes its built-in reverb and chorus sound astonishingly textured and authentic.

There are acoustic guitars, and then there are Yamaha’s TransAcoustic guitars. For those in the dark, Yamaha TransAcoustic series guitars are solidly crafted acoustic-electric instruments as is, but what makes them unrivaled is that they come equipped with TransAcoustic technology that incorporates built-in reverb and chorus, which upon activation, elevates the natural acoustic guitar sound into an entirely transformative experience.

If you’ve never tried one, it’s something to behold once you hear it, because the effected sound emanating from the guitar’s body chamber sounds as if it were processed in a recording studio or even a live setting - and it’s achieved without adding any external gear, pedals or amplifiers. I totally gushed over the steel-string FS-TA TransAcoustic in an earlier review, but after playing the Yamaha CG-TA TransAcoustic, I find this one sounds far more enchanting presented here as a nylon-string.

The CG-TA TransAcoustic arrives in a standard classical body shape with a fetching vintage orange tint and features a solid spruce top, laminated ovangkol back and sides, nato neck and rosewood fingerboard and bridge.

For those who are used to playing traditional dreadnought or concert-sized steel-string acoustics, you’ll need to get accustomed to the wider nylon-string spacing from its 2.04-inch (52mm) nut width, which is fairly common for classical guitars.

The guitar comes with Yamaha’s TA technology, consisting of an actuator discreetly mounted inside the sound chamber that detects the string’s vibrations and transfers those reflections throughout the body, resulting in spacious reverb and thick chorus depending on where you set the controls.

Three slim thumb wheels adjust reverb (hall and room) and chorus, while the last one doubles as a line-out volume (for a PA or amp) and turns the TA on/off (all you have to do is push and hold for two seconds).

Finally, the TA is powered by two AA batteries concealed inside the endpin jack’s compartment.

Without enabling the TA technology, the CG-TA is an all-around robust acoustic and, it’s safe to say, an excellent introductory- to mid-level instrument for those who wish to take a deep dive learning classical guitar. I also dug its satiny, matte finish neck and relatively low action that lends to an overall enjoyable feel and smooth playing experience.

But the star of the show is its TransAcoustic capabilities, which instantly reveal the guitar’s almost supernatural sound once activated. On just the hall setting, your ears are pleasingly stimulated as the cavernous reverberations uncannily swirl in the air around you, making your sensory perceptions do a double-take - surprised that it’s all coming from the soundhole.

The chorus is also really good, very lush and very '80s in its doubled effect. However, I found myself hanging onto the natural-sounding reverb, which makes everything you play sound more polished. Is it novel? Definitely. A bit of a gimmick? You could certainly argue that. Is it a must-have? Man, it’s hard to say no.

Try as I might, it’s a guitar I couldn’t put down because its effected sounds are so immersive and just plain fun. No need to get to Carnegie Hall; Yamaha has delivered the acclaimed venue to your living room with this guitar.