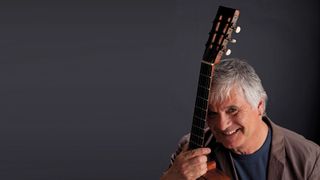 Laurence Juber — or “LJ,” as his friends and fans know him — often is associated with his tenure in Paul McCartney’s popular Seventies band, Wings, but he was a “first call” session guy for years before and after that brief spell. Besides playing on numerous high-profile sessions (not to mention Wings’ 1979 album, Back to the Egg), he’s spent the last few decades refining a solo career specializing in acoustic reimaginings of classic rock, Beatles and Wings songs, plus a host of standards and original songs. What he brings is a stunning sense of space and fluidity while simultaneously running a bassline and rhythm parts and keeping the melody uppermost — a truly wondrous sound.

His most recent album, Touchstones: The Evolution of Fingerstyle Guitar, is a trip through the history of the guitar from the 1500s to the present day. “I wanted to show the breadth of music that exists for the guitar, and also to include significantly relevant pieces for the lute and the vihuela, which were close relatives to the guitar,” he says. “As the album title suggests, they’re all kind of touchstones in the history of fingerpicked guitar.”

Having been extremely prolific in terms of his recorded output, with numerous phenomenal arrangements of classics from the rock canon, what determines whether a song is “LJ worthy”?

“First it’s got to have a melody that I love. If I decide to work on a piece, the next thing I’ll do is work out how to fit my vision of it to the instrument. I’m not afraid to change the key, use alternative tunings or even invent a tuning to enable me to fit in the essential components of what made the original such a great record. It’s all about servicing the song.”

When watching Juber perform the Beatles’ “I Saw Her Standing There,” for example, it’s striking how relaxed he looks while producing the sound of at least two guitarists — and sometimes three. “Relaxation is crucial from a technique point of view,” he says. “I can’t afford to tense up and lose the fluidity in the playing.”

As for whether LJ is planning to maintain his high workrate, “I’ve got an album of standards prepared and ready to record, and I think the album after that may well be another collection of Beatles songs. I’m working with a music theatre group on a play called Part of the Plan, which is based on Dan Fogelberg songs, and I’m also planning to write an album of all originals, so I guess the answer is yes!”