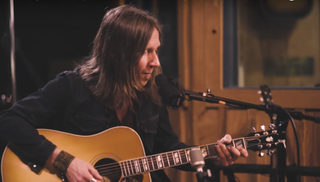 Blackberry Smoke—fresh off the release of their terrific new full-length, Find a Light—have announced a new acoustic EP, The Southern Ground Sessions.

Comprised of acoustic versions of songs from the Southern rockers' latest LP, Find a Light, the six-track EP is set for an October 26 release. The EP's name comes from Zac Brown's Southern Ground Studios in Nashville, where it was recorded.

You can watch the band perform a stripped-down version of Find a Light track "Run Away From it All" above.

Though the Georgia natives are most well-known for their swaggering, powerful Southern rock-indebted sound, their choice to record an acoustic EP isn't terribly surprising. The band's frontman, Charlie Starr, told Guitar World in a recent interview: "I grew up in Lanett, Alabama, which is about 85 miles southwest of Atlanta, and I was initially playing bluegrass and traditional country music. Because that’s what my dad played. And my first musical influence was watching him play the guitar and sing songs at home. And he loved only that music.

"No rock and roll. No jazz. No r&b. No blues. Just bluegrass and traditional hillbilly music. So I wanted to do that pretty much immediately. At five or six years old, I wanted his guitar—every time I saw it I had to put my hands on it. He recognized that, and he was never too busy to play for me. And I had favorites at that point, things like “The Wreck of the Old ’97,” “Your Cheatin’ Heart,” “Blue Moon of Kentucky,” all that stuff. Then when I was six he bought me my own guitar, taught me the cowboy chords and away I went."

You can read our full interview with Starr—taken from our July 2018 issue—right here.