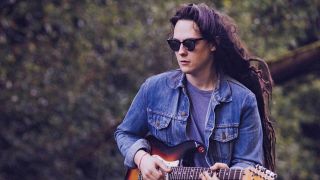 If you’re unfamiliar with the name Chris Buck, chances are you won’t be for much longer. The 28-year-old Welsh guitarist is already well established in the U.K., where he’s been tearing up stages for years with his blues-drenched rock-and-soul outfit, Buck & Evans. Along the way, Buck and the band have picked up accolades from peers, including Iron Maiden’s Adrian Smith, former Whitesnake guitarist Bernie Marsden and, most prominently, Slash, who has jammed onstage with Buck on more than one occasion and has referred to him as “a fucking amazing guitar player.”

“One caveat we had before we went in to record was ‘We do it like we do it live,’ ” Buck says about making Write a Better Day. “It may not be perfect, but it’s real and spontaneous. For me, at least, that was the magic of every record I grew up loving.”

On Write a Better Day, there’s also plenty to love in Buck’s guitar playing, which is steeped in the blues but at the same time unbeholden to its conventions. The guitarist cut his teeth on giants like Eric Clapton and SRV — “the usual suspects,” he says — but also points to players like Lindsey Buckingham, Mike Campbell and, of course, Slash, as major influences. And while there’s plenty of ripping, emotive lead work to be found on Write a Better Day (the kind of work that led one U.K. mag to cite Buck as the “Best New Guitarist in the World”), Buck’s strength lies in the fact that, first and foremost, he plays for the song. Furthermore, he says he gets much of his inspiration not from other guitarists, but rather from vocalists.

“I’m a big fan of artists like Sam Cooke and Otis Redding and Frank Sinatra,” he says. “I look at their phrasing and their dynamics and in some small way try to sound like that in my guitar playing.”

When it comes down to it, Buck continues, “from the moment I first picked up a guitar, my aim has been to make music that I would want to listen to. And the only thing I can hope for is that, with Buck & Evans, there are enough people out there that want to listen to this music as well.”