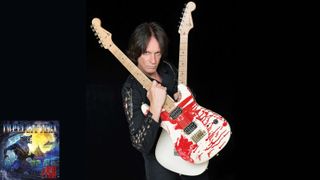 Any fan of Eighties shred guitar will most likely remember the name Chris Impellitteri. At a time when the neo-classical guitar movement was exploding via the roster of Relativity/Shrapnel players like Yngwie Malmsteen, Steve Vai, Joe Satriani, Jason Becker, Paul Gilbert and Tony MacAlpine, Impellitteri released his first EP, Impellitteri (AKA “the Black EP”) in 1987 to rave reviews. The tracks “Lost in the Rain” and “Burning” are built on hard-driving Iron Maiden/Judas Priest grooves and feature mind-meltingly fast, precise guitar solos that showcase Impellitteri’s brilliant technique.

Chris has since released 11 albums under his band name, Impellitteri, including their latest, The Nature of the Beast [Frontiers Music Srl], which features his longtime band mates, vocalist Rob Rock and bassist James Amelio Pulli, plus ex-Slayer drummer Jon Dette. The Nature of the Beast was recorded in Los Angeles with engineer/producer Mike Plotnikoff (Van Halen, Aerosmith, In Flames) and Canadian mix engineer Greg Reely (Overkill, Fear Factory, Machine Head).

“Back in the Eighties, I was lumped in with all of the shredder guys, and I have nothing but the utmost respect for all of them,” Impellitteri says, “but I’ve never thought of myself as a ‘solo’ guy. The concept of playing in a band — and playing guitar in a way that serves the overall band sound — is what I’m most interested in. My love of music is tied directly to the interaction between musicians, because we communicate with each other through the instruments we play.”

The air-tight interaction of Impellitteri and his band is crystal clear on the album’s first single, “Run for Your Life,” as well as the super-heavy tracks “Hypocrisy” (tuned to Drop D down one whole step), “Masquerade” and the seriously crushing “Gates of Hell.” The album also features inventive covers of Black Sabbath’s “Symptom of the Universe” and “Phantom of the Opera,” featuring keyboardist Edward Harris Roth, who tours with the band, covering the harmonized guitar lines Impellitteri overdubs in the studio.

“When writing for a new record, everything always starts with the riff,” Impellitteri says. “If the riff can stand on its own, it gets developed into a composition and the arrangement will start to fall into place. ‘Masquerade’ is my favorite song on the record. When I came up with that riff, I ran into the studio and got it down in the heat of the moment. ‘Run for Your Life’ has got a Maiden/Priest type of vibe, and ‘Gates of Hell’ features a ton of guitar riffs that are really fun to play.”

Impellitteri is originally from Ledyard, Connecticut, near Groton, and picked up the guitar at age 9. His teacher insisted that he learn music theory, scales and chord forms, for which Impellitteri is eternally grateful. His love of Vivaldi’s violin concertos steered him toward the classical elements in his music; as an early teen, hearing Al DiMeola had a huge impact, leading to an intense daily practice routine in the development of his speed-of-light alternate picking technique. He cites Gary Moore, Eddie Van Halen and Brian May as his primary rock guitar influences. Today, Impellitteri’s playing is more precise, emotional and expressive than ever.