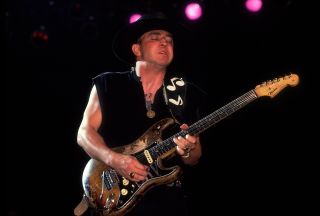 For musicians, spending time to craft a song, capture the right performance and produce a recording with just the right combination of effects and overdubs is an art unto itself. However, there are instances throughout rock history when an artist’s whole-hearted attempt to convey a feeling in the studio has paled in comparison to a good old-fashioned, off-the-cuff live performance. Here are just a few examples when a live version of a song outshines the original studio take.

While we're on the topic, we can all agree that sounding great in a live setting is important. And if you play in a gigging band, getting the right PA is something to take seriously. Luckily, the high-power, full range and flexible Bose F1 system can take you there! For more info, check out bose.com.

Led Zeppelin, "Black Dog" from How the West Was Won

It's hard to imagine that Led Zeppelin IV’s opening track "Black Dog" could rock any harder than it already does. But this version on How the West Was Won — a live album released in 2003 featuring two 1972 performances in Southern California — gives it a run for its money. It's no secret that the recordings were extensively edited before being released to the public, but regardless, it showcases Zeppelin at what many consider to be their peak, and the band sounds exceptionally ferocious — especially Page's guitar.

When it comes to Stevie Ray Vaughan's guitar god status, "Texas Flood" sets the bar pretty high. Yet, the studio version on his 1983 debut falls slightly flat compared to this performance on 1987’s Live Alive, recorded at the Montreux Jazz Festival. Part of Stevie's greatness was his ability to play in the moment — to let his fingers speak his emotion — and that's what you hear on this version of the song.

The Allman Brothers Band, "Whipping Post" from At Fillmore East

When you compare the studio take against the At Fillmore East version of the Allman Brothers Band's "Whipping Post," they have little in common. The original recording, included on the band's 1969 debut, clocks in at a little over five minutes. Meanwhile, the Fillmore version takes up the entire side of an LP at over 22 minutes long. But more than that, it captures the band at their best, pushing the envelope of song structure and improvisation, with guitarists Duane Allman and Dickey Betts trading phenomenal solos.

Nirvana, "All Apologies" from MTV Unplugged in New York

Nirvana's MTV Unplugged album, released in 1994, showcased a side of the Kurt Cobain that was rarely on display. Playing their instruments loudly was an essential part of the band's dynamic, but stripping this away put Kurt's incredible sense of melody — and his voice — in plain view. It's in this setting that songs like "All Apologies," which originally appears on 1993's In Utero, shine especially brightly.

With its far-out guitar solos that pan sporadically from the left to right speaker, the studio recording of "Voodoo Child (Slight Return)" — the closing track on 1968's Electric Ladyland — is memorable by itself. But Hendrix frequently took the song to otherworldly places live, and the performance at Woodstock on August 19, 1969, is a prime example. With a faster tempo — and the addition of rhythm guitarist Larry Lee and conga players Juma Sultan and Jerry Velez — the band careened their way through a thirteen-minute "Voodoo Child," punctuated by Hendrix's incredibly cathartic solos that rival the original recording’s.