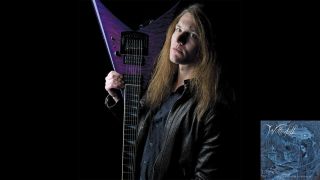 Although Jake Dreyer has been making waves as a major-league shred monster for years, it’s astonishing to remember that he’s only 26. When we catch up with the guitarist — an active member of both Iced Earth and Witherfall — he’s heavily promoting Witherfall’s new album, A Prelude to Sorrow. It’s a mixture of lightning-fast soloing and bone-crunching riffage interspersed with atmospheric acoustic interludes that picks up where the 2017’s Nocturnes and Requiems left off. Stylistically, Dreyer describes the band’s sound as progressive metal — a pretty fair description.

Given Dreyer’s prodigious talent, it’s somewhat reassuring to know he wasn’t a six-slingin’ ace from the moment he first picked up a guitar. “No, I worked my ass off,” he says. “I was kinda messing around, not totally committed, until I heard Yngwie Malmsteen when I was 14 — and something clicked. I became committed and played for hours every day.” His blue-collar work ethic is an inspiration to anyone striving to improve. “I play a minimum of four hours a day, every day. There has to be some major blockage in my schedule to stop me from playing. I don’t just sit around jamming; I have exercises I created to focus on areas of technique or to prep for live dates where there are some tricky runs to play. I always use a metronome and I’m always working on things to stretch myself.”

Dreyer is a student of the history of rock guitar, citing Queen as one of his favorite bands. He’s also a major fan of the Shrapnel-era greats, particularly Jason Becker and Paul Gilbert. These days, Dreyer’s abilities unquestionably place him in the same league as several of his heroes — and a lot of that can be attributed to his time at Massachusetts Institute of Technology (MIT). “The whole focus on guitar at MIT is so intense. You’d get guys dropping out realizing that maybe they don’t love playing the guitar that much! The intensity of the workload and the wide range of disciplines the course covers were a huge boost to my actual playing and musical development.”

Going forward, how is he planning to sustain the two bands? “It’s easy really. Everything is planned out so far ahead for Iced Earth, so I can see exactly where I can schedule work for Witherfall. We’re already planning the next Witherfall album now, but basically I’m just happy to be able to keep playing and do this for a living!”