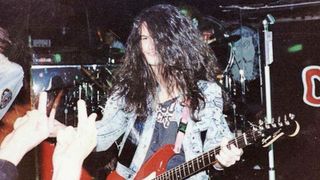 Just in case you’re wondering why this guy looks somewhat familiar, or isn’t this some dude in Skid Row? Well, that’s me, Paul Riario from Guitar World, and yes, I lived on the “Wild Side” during the Eighties hair metal invasion. Back then, I used to open for some of the bands that appear in this feature, as well as being in many of my own bands that were “trying to make it.”

Here, I’m playing with one of my original bands with the unfortunate name “Cleavage,” circa 1988. We had a minor hit called “15 Get Ya 20.” If you dig it up on YouTube, that’s me on guitar and background vocals on the recording — and incidentally I won some award for the solo from Kramer Guitars at the time. But what I love most about this picture are the middle fingers raised high toward me — and me shooting it right back (Ah, those were good times). As you can see, the love for me hasn’t changed all that much!