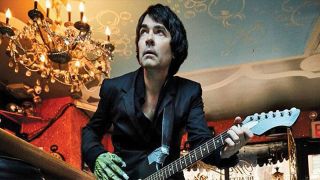 Jon Spencer with his Silvertone 1476 (Image credit: In the Red Records)

"You think it’s easy being in a band?” Jon Spencer asks aloud with an overload of attitude on Beetle Boots, a gleefully raucous meta-commentary that, interestingly enough, sits in the middle of the rawk lifer’s first-ever solo album, 2018’s Spencer Sings the Hits. He’s racked up more than enough experience to weigh in on the question, having worked with Eighties noise rock pioneers Pussy Galore, rockabilly renegades Heavy Trash and the equally conventions-twisting Boss Hog and the Jon Spencer Blues Explosion. But by 2017, the latter three projects had all slowed down significantly, and the guitarist-vocalist found himself without anyone to jam with for the first time in decades. Eventually, he decided he had to forge forward on his own.

“The idea wasn’t to make a solo record; the idea was just to make a record. I was kind of in limbo, didn’t have a band anymore; the Blues Explosion had stopped and Heavy Trash had stopped,” he says over the line from his New York City apartment, explaining that even though Boss Hog released their Brood X in 2017, that band’s part-time status left him without a steady creative outlet.

Being left to his own devices was a boon, though, with Spencer Sings the Hits presenting some of the nastiest cuts in his catalog to date. After writing sessions in a Lower East Side basement, Spencer took a dozen new tunes to Benton Harbor, Michigan’s Key Club Recording Company, and worked over the arrangements with organist Sam Coomes (Quasi) and drummer M. Sord. Together, they clatter up puke-and-paisley-printed garage rock (Do the Trash Can), chipped-tooth gutter funk (Hornet) and slippery, slack-tuned R&B (Love Handle). Further pushing his Hits in the red, the record also finds Spencer mashing out rhythms on ventilation ducts and gas tanks with a ball peen hammer.

Working alongside producer Bill Skibbe, Spencer threw his well-worn, duct-taped Silvertone 1476 through various vintage amps the Key Club had on hand, though he notes that he especially loved the filthy, low-end tone found within the 8-inch speaker of a Kalamazoo Model One. He also credits the record’s raunchiness to rediscovering the feel of his first notorious band. He explains: “a lot of times it was trying to get that Pussy Galore sound. You have a guitar that’s way too trebly, using a wah-wah all the way on. Just the most annoying, trebly attack sound.”

Shortly after tracking the record, Spencer, Coomes and Sord started playing out live, adding former Pussy Galore/Sonic Youth drummer Bob Bert on junkyard percussion. Not soon after, Spencer dubbed his cohorts the Hitmakers; he hopes they write as a quartet for a follow-up LP. “Beetle Boots” may have Spencer questioning the motives of musical groups, but after reluctantly going solo, he’s relieved to be back in a band.

“I’m playing in a band because I love these kinds of sounds, this kind of music. It’s always come from a place of devotion — it’s an obsession. I certainly never set out thinking this is a good job, that this could be a career, or that I’m gonna make some money. It’s because I’ve got the bug in me. That’s it. I’ve still got the virus!”