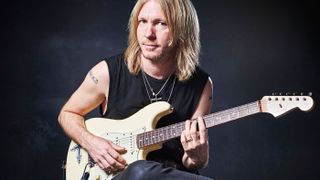 “The people who slammed me early on because they thought I was copying Stevie Ray Vaughan were acting out of jealousy to some degree,” says Kenny Wayne Shepherd regarding the 'SRV clone' accusations that dogged him in his early years.

“Perhaps they wish that their own career had gone a little bit further, so they despise you for yours. I was sensitive at first, but I had the entire Double Trouble band on my second album [Trouble Is…], and their approval definitely outweighed the negative vibe some people tried to lay on me.”

Looking back on those early days, KWS is justifiably proud.

“One piece of advice I got before I signed a record deal was don’t let someone make you what you’re not - or record something you don’t like - because if you have a hit with it, you’re stuck with it forever. I just made the album I wanted to make.

We still play songs from [1995’s Ledbetter Heights] live now. It would be different if I recorded it today, but for a 17 year-old, I think it’s great.”

Although Shepherd is definitely known as a blues guy, his new album, The Traveler, is a bit more diverse.

“To me, this is contemporary blues. The foundation of my music is blues, but then I take influences from all the genres of music I grew up with - rock, country or whatever - and mix it up with blues to get something fresh.

“Tailwind has a country vibe, but the 6/8 time signature is interesting, and the slide solo is very bluesy. It’s one of the standout tracks for me that adds depth to the overall product.”

“After 30 years of this, I think I’ve honed in on what works for me, which is the Strats I’ve been using for years - although there is an ES-335 on there that Gibson gave me as well.

“I brought in my two original Uni-Vibe pedals, one of which was allegedly originally owned by Jimi Hendrix, so that was great. As a result, there’s a lot of Uni-Vibe.”

There are also a couple of unusual covers, including Mr. Soul by the Buffalo Springfield and Turn to Stone by Joe Walsh.

“I like to dig deeper into an artist’s catalog when I cover their songs; and try not to go for the obvious choices. I also think we always toughen them up and add a little bit of extra testosterone to the mix!”