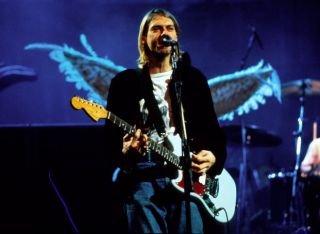 Here's Guitar World's last interview with Kurt Cobain, from the February 1992 issue. The original headline was "Cool Hand Puke: Kurt Cobain tries to explain why Nirvana - third-hand guitars and all - is suddenly the hottest band in the country."

“We’re just musically and rhythmically retarded,” asserts Kurt Cobain, guitarist, vocalist and chief songwriter for Nirvana. “We play so hard that we can’t tune our guitars fast enough. People can relate to that.”

Seems reasonable enough, considering that Nevermind, the Seattle trio’s major label debut, has become one of the hottest out-of-the-box albums in the country.

Fueled by the contagious hit single, Smells Like Teen Spirit, the spirited album turned gold a mere five weeks after its release, and leaped past both Guns N’ Roses’ Illusions just one month later. But their sudden, platinum-bound popularity probably had more to do with band’s infectious, dirty riffs and wry lyrical hooks than with the roughly played, out-of-tune guitars, of which Cobain is so proud.

“We sound like the Bay City Rollers after an assault by Black Sabbath,” continues the guitarist in his nasty smoker’s hack. “And,” he expectorates, “we vomit onstage better than anyone!”

Nirvana began their career with 1989’s Bleach (Sub Pop), an intensely physical mélange of untuned metal, drunk punk and '70s pop, written from the perspective of a college drop-out.

The album’s other notable distinction was that it was recorded in three days for $600. Nevermind, costing considerably more than six bills, is Nirvana’s major label, power-punk/pop masterpiece, awash in slashing, ragged guitar riffs, garbled lyrics and more teen spirit than you can shake a Kiss record at.

"That’s fine; let them be fooled! I don’t have anything against "Headbanger’s Ball," but it’s strange to see our faces on MTV."

"That’s real flattering. We met him recently and he’s a real nice guy. We talked about the Sub Pop scene, heavy metal and guitars."

Speaking of guitars, you seem to favor low-end models.

"I don’t favor them - I can afford them. [laughs] I’m left-handed, and it’s not very easy to find reasonably priced, high-quality left-handed guitars. But out of all the guitars in the whole world, the Fender Mustang is my favorite. I’ve only owned two of them."

What is it about them that works for you?

"They’re cheap and totally inefficient, and they sound like crap and are very small. They also don’t stay in tune, and when you want to raise the string action on the fretboard, you have to loosen all the strings and completely remove the bridge. You have to turn these little screws with your fingers and hope that you’ve estimated it right. If you screw up, you have to repeat the process over and over until you get it right. Whoever invented that guitar was a dork."

It was Leo Fender.

"I guess I’m calling Leo Fender, the dead guy, a dork. Now I’ll never get an endorsement. [laughs] We’ve been offered a Gibson endorsement, but I can’t find a Gibson I like."

Is the Mustang your only guitar?

"No, I own a ’66 Jaguar. That’s the guitar I polish and baby - I refuse to let anyone touch it when I jump into the crowd. [laughs] Lately, I’ve been using a Strat live, because I don’t want to ruin my Mustang yet. I like to use Japanese Strats because they’re a bit cheaper, and the frets are smaller than the American version’s."

The acoustic guitar you play on Polly sounds flat.

"That’s a 20-dollar junk shop Stella - I didn’t bother changing the strings. [laughs] It barely stays in tune. In fact I have to use duct tape to hold the tuning keys in place."

Considering how violently you play the guitar, I have to assume that you use pretty heavy-duty strings.

"Yeah. And I keep blowing up amplifiers, so I use whatever I can find at junk shops - junk is always best."

What was the last amp you blew up?

"A Crown power amp that was intended for use as a PA, but which I used for a guitar head because I can never find an amp that’s powerful enough—and because I don’t want to have to deal with hauling 10 Marshall heads. I’m lazy—I like to have it all in one package. For a preamp I have a Mesa/Boogie, and I turn all the mid-range up. And I use Radio Shack speakers."

How reliable is this set-up? It doesn’t seem like it would be that durable, especially in view of all the touring you do.

"It works out okay. The sound changes with every club we play in, but I’m never satisfied. I think the sound I get is mainly a result of the Roland EF-1 distortion box I use. I go through about five a tour."

Ever get the urge to use the twang bar?

"No. Anybody that plays guitar knows that only Jimi Hendrix was able to use the standard tremolo and still keep it in tune. Those things are totally worthless. I do have one on a Japanese Strat, but I don’t use it."

Your first album, Bleach, was recorded for $600; how much did Nevermind run you?

"[laughs] I don’t remember, I’ve got Alzheimer’s. Please, don’t ask how much our video cost; that’s a hell of an embarrassment. We definitely could have used some film student, who would’ve done just as good of a job."