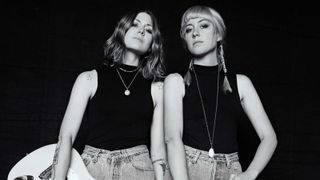 It’s become a universal rite of passage: kids revolt against their parents’ style of music by turning to rock and heavy metal. However, sisters Rebecca and Megan Lovell, who comprise the roots-rock duo Larkin Poe, turned that practice on its head. “Our dad would spin records by Queen, Fleetwood Mac and Black Sabbath,” Rebecca recalls. “Megan and I were into that stuff, but then we fell in love with bluegrass and Americana. That’s when we kind of came into our own.”

Megan tried her hand at the guitar and mandolin, but when she heard Dobro master Jerry Douglas, she realized the resonator-based instrument was calling her name. After becoming a proficient Dobro player, she took up the lap steel. “That’s where my classic rock upbringing came back,” she says. “I wanted to get a little bolder and louder. I loved what David Lindley did on the lap steel, and then I heard Derek Trucks playing slide. So I said, ‘Yep, that’s for me.’”

For her part, Rebecca proved to be a natural on the mandolin, and that was her main instrument while she, Megan and older sibling Jessica (on lead vocals and fiddle) performed as the traditional bluegrass outfit called the Lovell Sisters. In 2009, Jessica split, but Rebecca and Megan stayed together, rechristening themselves Larkin Poe (after their great-great-great grandfather) and adopting a grittier, more “anything goes” approach to Southern roots music. It was then that Rebecca, now assuming the lead singer role, picked up the electric guitar.

“I came to the guitar late, but I dug right in,” she says. “For rhythm playing, I’m very inspired by Jeff Buckley. He could play chords so melodically. And for leads, I can’t say enough about Stevie Ray Vaughan. His style was so aggressive and big. Lately, I’m obsessed with Skip James, who did more of a hill country blues thing. I try to mix it all up.”

Larkin Poe found early boosters in the likes of T Bone Burnett, Steven Tyler, Conor Oberst and Elvis Costello, all of whom tapped the sisters for album and touring projects. “We’ve had some powerhouse artists take us under their wings,” Megan says. “With the whole MeToo movement, it’s been great to be treated very gender neutrally. It’s never been about us being ‘chicks.’ People just see us as musicians who can really play.”

Over the course of five EPs and three albums, Rebecca and Megan started introducing modern textures and embellishments to their sound. Last year’s Peach wove electronic percussion throughout the sisters’ natural instrumentation, and on their latest release, Venom & Faith, the blend of old and new school makes for fascinating juxtapositions. “Fly Like an Eagle” is built on a jarring bed of cutting-edge, distorted rhythms over which Rebecca dispatches searing blues licks. Megan’s sultry lap steel playing is the centerpiece of “Good and Gone,” but it’s in stark contrast to the minimalist, unsettling backing tracks. And the walloping, avant-garde theatrics of “Ain’t Gonna Cry” sound more like PJ Harvey than, say, Alison Krauss.

“Without a doubt, we’re trying to sound less produced and more raw,” Rebecca says. “Most of the time, musicians go into the studio and they create these huge, larger-than-life versions of themselves. The emotions get lost with all the instruments and stuff they put on their tracks. Megan are I strip things down to the bare essentials, and I think that reveals our souls better.”

Adds Megan, “Producing ourselves has been essential to the process. Rebecca and I will light some candles in the studio, and we’ll get kind of spiritual. And we’ll ask ourselves, ‘Here’s the two of us, here’s how we sound. What do we need, and what don’t we need? And most of the time, that answer is, ‘We don’t need much — just us.’”