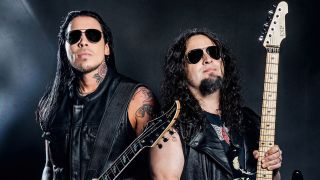 The departure of chief songwriter/co-guitarist/co-founding member Chris DeGarmo following the 1997 release of Hear in the Now Frontier was undoubtedly a major blow to Queensrÿche. Previous to the band’s latest slab of metal, The Verdict, Queensrÿche had continued to release a dozen albums, all of them paling in comparison to any of the DeGarmo-period records. The subsequent albums to Now Frontier are marred, for the most part, by mediocre songwriting and a shortage of memorable melodies and hooks. For more than a decade after DeGarmo left the group, vocalist Geoff Tate was writing a large share of the band’s material, to mostly lackluster results, and the band’s career fell into a slow, downward spiral. In turn, many fans lost interest and ultimately the group fired Tate, who is now fronting a new band, Operation: Mindcrime.

The two remaining co-founding original members — guitarist Michael Wilton and bassist Eddie Jackson — have teamed with guitarist Parker Lundgren and powerhouse vocalist Todd La Torre, a drummer himself who also plays drums on The Verdict. (The group’s other co-founding member, drummer Scott Rockenfield, is on hiatus.) The third album of this revamped and revitalized lineup of Queensrÿche is a powerful prog-metal juggernaut that stands among their hardest-rocking albums. Tate’s dismissal has evidently resulted in a rebirth of the band.

The Verdict is reminiscent of classic Queensrÿche yet exhibits a sound that continues to evolve. Each member is getting along marvelously, and thus the music is much improved and far more potent than the group’s post-DeGarmo Tate-era years. La Torre’s drumming is heavy and steady, pummeling his kit with sheer gusto, while Jackson accompanies the attack with propulsive, nimble bass runs that help kick the songs into high gear, bolstered by La Torre’s ferocious Tarzan-type shouts. Wilton, meanwhile, proves to be one of metal’s most underrated guitarists. His guitar tone is thick and juicy, and bursting with passion, as it has been ever since the band’s debut more than 35 years ago. Lundgren’s solid rhythm work and incisive lead breaks are the icing on the cake.

“We wanted a harder edge on this album,” Wilton says. “Our fans expect it from us. The Verdict has all the elements of our style — hard rock, progressive and metal. It’s all there. We’ve rebuilt the band, and more of our fans are seeing and hearing us. We lost our chemistry with Tate and have moved on happily without him. When DeGarmo left the band, we weren’t writing as a band anymore. Now we are creating music as we did during our early days, and firing on all cylinders.”

“We pushed the envelope on this album,” Lundgren adds. “We wanted to bring a progressive element into the heaviness of whatever song we are playing. We’re all very proud of how exciting and hard rocking the album turned out, and I think our fans, both old and new, will enjoy it very much.”

Lundgren, 32, is Queensrÿche’s youngest member; he wasn’t even born when the band released its self-titled 1983 debut EP. “I started playing guitar when I was 13,” he says. “I come from a large musical family, and I grew up listening to various jazz and blues guitarists. I started playing guitar in the late Nineties before the advent of YouTube. There was no way to get guitar lessons online, so I had to use outdated instructional VHS tapes. I had a subscription to Guitar One magazine. A Queensrÿche song, ‘I Don’t Believe in Love,’ was one of the songs transcribed in it, and I learned how to play it. It was through bands like Queensrÿche and the Scorpions that I was introduced to dual-guitar harmonized guitar solos.” These days, in between tours and during downtime, Lundgren gives guitar lessons. He cites Randy Rhoads, Stevie Ray Vaughan and Django Reinhardt as his biggest influences.

Unlike DeGarmo’s previous replacements, Kelly Gray (1998-2002) and Mike Stone (2002-2008), Lundgren is no hired gun — he has shaped into a bona fide full-fledged band member. “Gray and Stone had their own styles, because they are both seasoned guitarists,” Wilton says. “Although it was great playing with them, in the end the fans win; they want to hear the exact notes that were played on the albums. Parker is a lot younger than those guys. When he learned Queensrÿche’s music, it wasn’t tainted by anything he had played previously. Parker is growing into a great guitarist.”

The Verdict rocks forcefully from beginning to end. One the album’s most walloping cuts, “Bent,” is built on a dark, twisting groove that’s sure to excite the group’s ardent longtime fans. On it, Wilton and Lundgren play a dueling guitar exchange that recalls Wilton and DeGarmo’s classic tag-team workouts of days gone by. “I love that song,” Wilton says. “It’s a very heavy guitar-driven Queensrÿche composition that segues beautifully from one guitar part to another.”

“Michael and I incorporate the call-and-response guitar trade-off thing more so on this album than on the previous two albums I did with the band,” Lundgren says. “The Verdict reaches back to the old Queensrÿche catalog and brings back some of those vibes. We spent a lot of time constructively arranging the guitar parts rather than playing just a lot of improvised gibberish. Michael and I have been playing together for 10 years, and we work quite well as a team.”

“Parker is young, proficient, and has no trouble playing even the most intricate guitar parts,” Wilton says. “He’s loyal to the cause. Onstage, Parker and I play the music how it was played and recorded on the albums, which is what our fans want to hear. I play a majority of DeGarmo’s parts because I know his style of playing, and often I’ll have Parker play my parts. When Parker joined the band, I asked him to play the songs note for note how they were played on the albums, which is what he has been doing.”

Queensrÿche is best known for two albums — their 1988 opus, Operation: Mindcrime, one of most iconic metal albums of all time, and the group’s 1990 follow-up, Empire, a multimillion-selling blockbuster that cemented the band as among the most popular of its era. Empire spawned a staggering six singles, all of which were made into MTV videos, and sent the band’s success hurtling into the stratosphere. Their popularity has endured until today, with Queensrÿche maintaining a fanatically dedicated following worldwide.

“Countless fans come up to me after a show and thank me for saving the band and not letting it go down the path that it was heading,” Wilton says. “I don’t even think about those later days with Tate anymore. We’ve rebuilt our fan base all over the world. We have a bunch of exciting new songs to play, and we plan on playing as many countries as we can. Our fans are so happy that we’ve kept pushing forward, and we don’t plan on stopping anytime soon.”