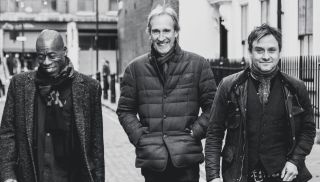 Mike + The Mechanics’ ninth studio album, Out of the Blue, captures the spirit and power of some of the band’s most beloved hits. Featuring music from throughout their 35-plus-year-career, the new album also gives fans a glimpse of the band’s future with three brand new cuts, “One Way,” “What Would You Do” and the album’s title track.

A special deluxe CD version of the album features six newly recorded “as-live” acoustic versions of “Don’t Know What Came Over Me,” “The Best is Yet to Come,” “The Living Years,” “Beggar On a Beach Of Gold,” “Another Cup Of Coffee” and “Over My Shoulder.”

In June, the band will meet up with an old friend, Phil Collins, joining him for the first six shows of his European tour.

What prompted the new Mike + The Mechanics album?

We've been touring the last eight years with two singers, Andrew Roachford and Tim Howar, and I observed the way the old hits have become something else. The two singers have made them their own with different interpretations. The sound was something quite special and I thought it would be nice to capture that in the studio.

It always starts with some chords, drum machine programming and bass pedals and guitar synths. Just making a big racket to get some starting ideas. Normally a title comes first but the best ones are when you get the words with the chords.

Let’s discuss a few of the new songs from the album, beginning with the title track, “Out of the Blue.”

I really like the title. In this day and age it has a positive statement on life. It’s fast and, in a sense, it’s also written a bit like a love song. Sometimes you're looking for someone special in your life and you try and try. Then suddenly, out of the blue, something comes along. At the same time it applies to life and the aspirations and hopes you’re trying to achieve.

How about “One Way”?

I went back to the old Akai to get that crunchy sound again. The intro is my drum machine programming and the strings are me plugging away on the Akai. It’s a nice sound.

What about “What Would You Do”?

It’s the same idea from a version we did on the last album. When the world stops loving you, what do you do? It’s meant to mean, “When things are tough how do you deal with it?” My wife said it sounds like a fading rock star who’s unpopular and being pissed off about no one liking you.

What was the recording process like for the new album?

The main part was done in the old Genesis studio. It was just like the old days, down the stairs in the basement. The acoustic songs were an additional idea. The reason we did them was because, in the past, we’d sometimes go into a radio station and do a few songs unplugged. I liked the way the songs worked with just piano, guitar and voice.

What can you tell us about the band’s tour schedule?

We’re in the middle of a run right now and then, in June, we’ll be opening for Phil [Collins]. We’ve done it before and it’s a fun thing for us to do.

Has your guitar setup changed much over the years?

I still have my EC model Strat. The grey color has turned to a green with age. I also use Roland Digital Echoes along with a T-Rex blue box and a wah-wah pedal.

What was the typical writing process like with Genesis?

We went through a process but never arrived for an album with a suitcase full of bits. Sometimes we’d go into the studio with no ideas at all. Phil would play a loop and off we’d go. It was very organic. I used to think that for each new album it wouldn’t work, but it always did.

With Phil back on tour and Mike + The Mechanics opening, the obvious final question is, will we be seeing another Genesis reunion in the future?

First and foremost there are no plans in place. Having said that, Phil’s back out touring and I’ll see him in June. His son is also drumming really great. I’ve always said never say never. Who knows? It’s different now than it was three years ago. Let’s just see.