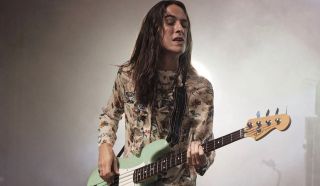 When American rock band Greta Van Fleet hit the scene a little over a year ago, their ’70s-style rock was a godsend for many. Their eight-song double-EP, From the Fires, eschews modern production wizardry in favor of an under-produced, throwback sound that relies mostly on musicianship and songcraft. Comparisons to Led Zeppelin have been rampant ever since the 2017 debut of Highway Tune, but this band of teenagers promises to be more than a derivation of their most obvious influence.

Hailing from Frankenmuth, Michigan, Greta Van Fleet recently wrapped recording their first full-length release. At age 19, Sam Kiszka is one of the band’s three brothers, including singer Josh and guitarist Jake (along with drummer Danny Wagner). They recently returned home from their first European tour and turned in a blistering set at Coachella in Indio, California.

What’s it been like to become so famous in such a short time?

What’s happened to us is not common at all, especially in the music industry. It’s amazing that so many people can jump onboard with what we’re doing. It’s great to be able to make music that’s fueling a new movement, and it’s cool to be the band that’s the catalyst for it.

Is it weird to have such big expectations at such a young age?

We went from a one-family house in the middle of nowhere, to never being home and living in tour buses, Airbnbs, hotels and studios. There’s no time to be at home, ever. There’s so much to do. There just aren’t enough hours in the day. It’s a lot of pressure, but it’s a hell of a lot of fun.

You’ve now played mostly original music your entire career. Who are your influences?

I listened to all the Motown music, like Marvin Gaye, the Four Tops - it’s music that moves you and makes you feel good. When I picked up bass, the first line I wanted to learn was I Heard It Through the Grapevine. I thought that riff was so cool. I probably actually learned the Creedence Clearwater Revival version first, but I kept learning these Motown bass lines, and I realized it was all James Jamerson. I was blown away. I got into him heavily.

Anyone else leap out at you?

I listened to Joe Cocker, Sam & Dave, the Beatles, Cream. Those crazy Jack Bruce leads really taught me how to play bass. John Entwistle, too. Listening to people who turn the bass into more of a lead instrument, and who make bass interesting, is what appealed to me. Just playing the root note and following the chord progression is boring, and it’s kind of ineffective for a four-piece. For the sound that we have, [playing melodically] increases the amount of energy, it increases how interesting the music is to listen to, and it ultimately makes the music feel better.

Has touring impacted your playing in a positive way?

I’m a thousand times better than I was last year, because we have been playing live so much. With the new record, I’ve really been focused on melodies - songs like Ramble On [Led Zeppelin II]. People sing that bass line. That’s how you know it’s a fantastic bass line.

John Paul Jones is kind of like the rock & roll James Jamerson.

Yeah, you can totally hear Jamerson-like modes and feels in Ramble On.

What are you using to track bass on the new album?

A good number of instruments. My one and only bass is a Seafoam Green Fender Precision Bass with Jazz Bass neck; it’s a ’50s reissue made in the ’80s. That bass sounds fantastic, and it’s the most comfortable bass I’ve ever played. I also used a ’72 Fender Telecaster Bass for a few songs, and a ’65 Precision owned by our producer, Al Sutton, as well as a ’69 Precision.

There are flatwounds on all of them except the ’69. That’s just in case I need a roundwound sound, but I do prefer flats. That’s another area where Jamerson influenced me - I like the mellower tone of the flats. It makes me do things that are counterintuitive to the sound that I want, like cranking my tone all the way up.

What about your signal chain?

My main sound is the Acme Motown DI tube interface, which Al Sutton makes. It’s fantastic; it puts the sound of the bass right in the spot where you want it. It sits back enough, but you can hear all the intricacies of the tone. We run that into a silver 1964 Fender 50-watt Bassman for a little more growl. You don’t have to crank it at all.

Are the Led Zeppelin comparisons intimidating?

Not really. I mean, it’s not like they aren’t the greatest rock & roll band ever [laughs]. It’s a huge compliment. I think the new record will pick up where we left off and show the many sides that Greta Van Fleet has in terms of soundscapes. And I think it’ll take our concept up a few notches. We’re also trying to keep live takes. We really value the natural feel of how we play live.

People seem fixated on your age, but the Beatles, Black Sabbath and Led Zeppelin were relatively young when they made game-changing records.

The young factor is a novelty. It’s not what we focus on. It’s great that people think we have a mature sound.

There seems to be something chivalrous about your music.

Chivalry. I like that. These days, there isn’t a lot of rock that gets stuck in your head. The expression of rock & roll lately is people being sad or angry. Why can’t we be happy about rock? Think about the late ’60s - Jimi Hendrix and Crosby, Stills & Nash. We can have a positive outlook on this, can’t we? People need to start looking at the good, because we need that a lot more now than ever.