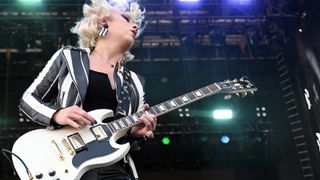 Kansas City-born blues rocker Samantha Fish is a bit of an internet sensation these days. A few videos of her live performances - in particular, a soulful rendition of Screamin’ Jay Hawkins’ I Put a Spell on You and a hellacious cover of Black Sabbath’s War Pigs - have blown up on Facebook, sending an army of new fans swarming in her direction.

Samantha Fish is one of…

“It’s amazing!” the singer/guitarist says of the online attention she’s been getting. “It’s been interesting to see how one weird cellphone camera video from four years ago that isn’t even on my radar can somehow get somebody’s attention and circulate the internet.”

Fish’s latest release, Kill or Be Kind, is loaded with the snarling guitar and mule-kick vocals that caused her videos to turn heads. Recorded at Memphis’ Royal Studios, the birthplace of works by artists like Chuck Berry, Al Green and John Mayer, the album stays true to its name.

While Fish has an impressive collection of unusual axes - a Custom Delaney 'Fish-o-caster' with a fish-shaped sound-hole, a Stogie Box Blues four-string cigar box guitar, and a Bohemian Guitars six-string with a vintage oil can body, among others - her main guitar on this album was her trusty Alpine White Gibson SG.

A flaw in that instrument made for a moment of serendipity while she was recording the song Love Your Lies, whose solo finds her wringing a warbling, tremolo flutter-like sound from a repeated note.

“I have a wonky fret on my guitar,” she says. “I went up for this bend, and it just sounded so fucking weird! I’m going to have to figure out how to recreate it, but it was just a defect of my guitar. I thought it sounded kind of wicked.”

From her impassioned leads to the fired-up whoops she lets out before solos, Fish’s delivery on Kill or Be Kind is nearly as energetic as it is in concert. She admits it has taken her some time to get to this point.

“I can hear on some of my earlier recordings where I was stressed, timid and not punching through,” she notes. “Go figure - six albums in, I finally relaxed in the studio!”