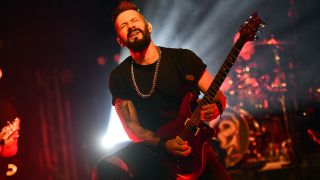 In 2015, Greek guitar phenom Yiannis Papadopoulos began a musical partnership with Creed frontman Scott Stapp. 2019’s The Space Between the Shadows is the first installment of the collaboration between the two.

Filled with tasteful playing, introspective lyrics and all the hooks you would expect from a Scott Stapp album, the record marks a return to the charts for Stapp - who has achieved two Top 50 tracks to date.

Beyond touring the globe with Stapp and co, Papadopoulos has released two instructional guitar books and is preparing to release his debut instrumental album. His playing draws from a multitude of influences and showcases seemingly limitless technical capabilities.

We sat down with the guitarist to discuss the albums, his books and more.

Stepping into a band situation as such a gifted instrumentalist, how does that impact your approach to what you play?

“I believe that every guitar player out there that takes the time to practice and improve, always enjoys playing long solos and improvising. In any given scenario though, when you’re stepping in a band situation you need to remember that the audience cares for the song and not just for the solo part.

"Keeping that in mind, I always try to think like I’m part of the audience. I try to play guitar parts that are interesting and challenging so that the guitar will have character and it will make the song sound better as a whole.

"I use all the theory and harmony I know in order to orchestrate the songs and write beautiful parts. When it’s time for the solo, I give my best to play things that justify the hours I put into the guitar and show how I think and what I can do.”

The bulk of Creed's catalog was notoriously void of guitar solos.  So you get to put your stamp on those live playing with Scott?

“The first thing I always do is approach every song note by note so that I can capture the feeling that’s in the album. After that, I always put my touch and parts to the songs and the solos so that they would fit my playing character and style. Scott trusts my playing. He and I have a very similar taste regarding music. Our ears are in tune.”

How did the songs that became The Space Between the Shadows take shape? Scott's audience certainly has an expectation of what a Scott Stapp album is going to sound like yet you're a different group of musicians.

“The song composition process for the new album started around a year and a half before its release. Different songs were created in different ways. I composed a few of them and presented them to Scott and then we made any necessary adjustments.

"For others, Scott had different melodies and riff ideas which we then combined into songs. Several songs were created during sound checks or even during days off when we were on tour.

"I like the new material very much. I believe the songs are heavy and modern with great vocal melodies and amazing lyrics that connect with the listener. In my opinion, this is the best Scott Stapp album and the fans embrace that.

"Anyone that comes to the shows can immediately see that the audience is singing loud, crying and head-banging to a great live show and performance by Scott and the band. As you said, the fans have certain expectations about the new music, so they know that we would never let them down. That’s why they’ve been following us in the USA and around the world, showing their love and support.”

You're putting together your debut album.  Can you talk about what we can expect?

“My instrumental album has been ready for quite some time now but I’ve been postponing its release waiting for the right moment. Most possibly it will be out in 2021.

"It’s going to have nine instrumental songs, and an intro following a style I describe as melodic shredding. All the songs have very challenging parts, different combinations of scales and techniques in order to create a great atmosphere and blend with beautiful, catchy melodies.

"The main characteristic is the contrast between the melodic and technical parts of the songs. You will find heavy songs with big riffs, ultra-fast alternate picking and sweep picking runs but you will also find slow songs with dark melodies and meaningful slow solos with sweet low gain sounds and long delays.

"You can find two songs of the album in an early version on my YouTube channel: Castle Black and One with the Waves.

“Apart from my album, I’m working on a project that will be released in 2020 and I’m very excited about it. The project is called Royal Time Machine and it’s a progressive fusion experimental trio with George Kollias from Nile on the drums, Michael Evdemon on the bass and myself on the guitars.

"We are already in the pre-production phase of our first instrumental album. The songs are going to be technical yet melodic and we are putting extra emphasis on the musicality of the songs first and then the technical, challenging tutti sections and riffs. Both this and my album are the results of years of hard work, and I can’t wait to share them with all of you.”

In a lot of your YouTube clips I noticed you use a fretwrap.  What does that do for your playing?

“I’ve been using the fretwraps by GruvGear for quite some time now. I usually use them in the studio when I record. I place them after the nut in order to avoid any unwanted noise during the guitar recording.

"Outside the studio, I place it behind the nut, because it affects the harmonics, resulting in a slightly more balanced guitar tone.”

You recently released your second instructional book Fretboard Concepts; how would you contrast it with your first book The Electric Guitar Technique Workout?

“Both of my books serve the same purpose: to show the kind of methodology that I followed to form my playing style. The Electric Guitar Technique Workout is a book that has everything that one might need to work on their technique.

"You will find exercises about Alternate Picking, Sweep picking, Legato and Licks - 138 patterns, examples and licks - along with notes on how to have a successful practice routine.

"You will also find a list of things to avoid, as well as tips that will help you maximize your time with the instrument. On the other hand, Fretboard Concepts includes everything that’s not technique related.

"Inside its pages, you’ll find scales/modes, different chord systems, arpeggios, theory, harmony, and advanced improvisation concepts. All these are followed by exercises and personal notes about how to think when you improvise and how to approach guitar soloing in general. Both books are for beginners to advanced level players and they are available on Amazon.”

Yiannis is currently on tour with Scott Stapp in Brazil. The Space Between the Shadows is available now through Napalm Records. Yiannis’ books are available through Amazon. Visit Yiannis's website for more details.