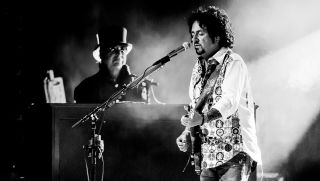 In his new autobiography, The Gospel According to Luke, guitarist Steve Lukather tells the story of how he and his high school friends became the most in-demand session players in L.A., and then went on to form Toto, a band that continues to defy the odds and has sold more than 40 million albums.

Co-written with Paul Rees, Lukather’s biography is an engaging, hilarious and at times tender look into the life of one of music’s most accomplished guitarists and session players. His list of musical achievements alone are enough to fill an entire book. The five-time Grammy winner (and eight-time nominee) has worked with everyone from Boz Scaggs and Paul McCartney to Aretha Franklin and Miles Davis. He was once asked to join Elton John’s touring band and played guitar on Michael Jackson’s Thriller – the biggest selling album of all time. Then there’s his personal, brotherly relationship with the Porcaro brothers and Toto, and all of the highs and lows in between.

The Gospel According to Luke is more than a time capsule of life, love and redemption. It’s a treasure trove of information for anyone wondering what it was like being in the studio and working alongside some of the greatest artists, producers and engineers in music history.

What made you decide to write a book about your life and career? Was it something you always thought about doing?

I originally wasn’t looking to do a book at all. A few years ago I got invited to the Grammy Museum to do a Q&A with Scott Goldman. It was one of those interviews where he asked me questions about my whole career, and I didn’t know what was coming. I remember the room was packed and as I was talking, people were howling in the aisles, laughing at all of my stories. When I came offstage, my agents came up to me and said, “You have got to write a book.” From there, I started getting calls from publishers and it morphed out of that. We spent a few years doing it, editing and rewriting. It was hard because there’s a lot of life I remember clearly, and a lot where they told me I had a good time! [laughs]

How did you become involved in session work?

My father saw being a pro musician as something more attainable than a rock star. I played by ear from the ages of seven to 14 and then took proper lessons. From that point, I met the Porcaro brothers. Both they and their father were session players. I started reading liner notes and following all of the great studio guitar players I looked up to, like, Lee Ritenour, Larry Carlton, Jay Graydon and Ray Parker Jr. I also happened to be geographically placed where I could actually meet these guys. Jeff [Porcaro] knew them all because Jeff was in Steely Dan when we were in high school.

What was it that appealed to you as session player?

It was the challenge. You never knew what was going to happen. People imagine studio players just sitting in a room reading dots on a piece of paper, like regular notation, but most of the time all we got were blank sheets of paper with chord symbols on it. Then they’d count off the song and you had to play something that was part of the arrangement. You had to be a quick study by listening to the song, finding a cool part that worked and then adding great hooks to the song. That’s what kept getting you called back. It’s also about playing with other musicians. Listening to what they do and complementing them. It’s about making everyone sound good and not just yourself. That’s what we did every day.

You played an enormous role on Michael Jackson’s album, Thriller. Is there a story behind Eddie Van Halen’s solo on “Beat It”?

I played everything on that song except the solo. Eddie’s solo was already done, but Donn Landee [Eddie’s engineer] had accidentally cut the two-inch tape, and they couldn’t sync up the master solo to the master lead vocal and everything else that was on the tapes. So, Jeff Porcaro and I put it all back together again. Jeff made his own click track and cuts and I put all the guitar and bass parts on it. I came up with a few of the other parts with Michael [Jackson] and Quincy [Jones] while we were hanging.

It’s simple. I’m using Bogner Helios, which I love, and 4x12’s. I also have a few stomp boxes on the floor along with a stereo delay, loop and wah.

Are there any projects you’re currently working on right now?

I just finished a tour with Ringo [Starr] and now I’ll be heading to the East Coast area with Toto. We’re releasing a new box set and are doing big business all over the world. I’ll also be doing a few shows with Toxic Monkey, my all-star rock/fusion band with Bill Evans, Will Lee, Keith Carlock and Steve Weingart, at the Iridium in New York for a week in December.

Of all the highlights if your career, is there one thing that stands out to you as most memorable?

There’s been so many of them. I’ve been in the room with some of the greatest artists, engineers and producers in the history of popular music over the last 60 years. It depends on the day. Is it Aretha Franklin sitting at the grand piano two feet away from me? Is it Paul McCartney standing there, or is it me jamming with George Harrison, Bob Dylan and Jeff Lynne? Then there’s Miles Davis, or standing there while Wayne Shorter makes me laugh as Herbie Hancock is taking a solo [laughs]. When I think about it I’m like, “How did this happen to me?” I can’t help but wake up and be grateful.

Is there a message you’d like readers to take away from The Gospel According to Luke?

It’s a little piece of my life, and the best I could do given the amount of time and space that I’ve had. It’s the good, the bad, the ugly and the funny. It’s all there. There are things I wish I could go back and do over again, but then there are people who say you’re doing exactly what you’re supposed to be doing right at this very second. Maybe all things lead to this moment. I’ve had a wonderful life and career and if it ended today I couldn’t be mad at anybody. I’ve surpassed any dream I may have had as a child. It’s sometimes hard to believe that I pulled it off. Maybe I’ll slow down in a couple of years, but right now, I’m going to continue to enjoy the ride.