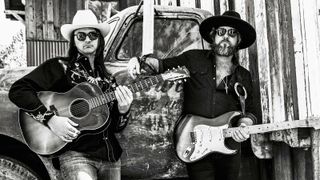 Devon Allman and Duane Betts met each other in 1989 when the Allman Brothers Band - the group anchored by their fathers, Gregg Allman and Dickey Betts - reformed for a 20th-anniversary tour. Devon, 17, walked onto a tour bus and saw a tow-headed preteen Duane listening to music intently on his Walkman.

Their friendship might’ve begun on their fathers’ bus over cerebral muso speed metal, but it’s blossomed into something very different - and very much their own. In June the Allman Betts Band released their debut album, Down to the River, a collection of original songs in which you can hear echoes of the Allman Brothers Band even as they forge their own sound.

The album was recorded live at FAME Studios in Muscle Shoals, Alabama, where so much essential music has been captured, including tracks by the Rolling Stones, Otis Redding and Wilson Pickett, to name just a few. It’s also where Duane Allman earned acclaim as a session player.

“We essentially birthed the band in Muscle Shoals,” Allman says. “When you listen to the record, that’s what you’re hearing.”

“We were learning the songs together,” adds guitarist Johnny Stachela. “As soon as they were being born, they were going down to tape. It was a great experience.”

Given all of Betts and Allman’s shared history, it’s easy to forget that prior to Down to the River they had never really helmed a joint project and had only limited onstage experience together.

The genesis of this band was a tribute to Gregg Allman and drummer Butch Trucks at the 2017 Peach Festival, just a couple of months after the senior Allman’s passing. Dickey Betts was retired and the sons’ performances - which also included bassist Berry Duane Oakley, son of original Allman Brothers bassist Berry Oakley - were powerful and emotionally gripping to the throng of grieving Allman Brothers fans.

“There was obviously a lot of emotion there that day,” Betts says. “When you play something like that, the whole idea is to grasp that emotion, channel it, to play from a place of raw emotion and translate it back out to the crowd. It felt great as we did it, and I could feel the energy of the crowd driving us on.”

Indeed, the sight of Devon and Duane on stage together is potent to Allman Brothers fans, all the more so because Gregg Allman and Dickey Betts never performed together again after Betts’ acrimonious 2000 departure from the band he helped form.

They did speak on the phone in Allman’s final months, and Betts attended his old partner’s funeral in Macon, Georgia. After returning to the stage last summer for limited shows, Betts suffered health setbacks and is back in Florida, apparently retired again.

All this adds to the allure of the sons performing together, but Down to the River stands on its own two feet, which was essential to Allman and Betts, who wanted to eliminate all thoughts that they were merely trading on their names.

“We could have done something any time over the last 10 years,” Betts explains. “But it wouldn’t have been this.”

“There’ve been a lot of fans out there who wanted to see the three of us do a project together for many years,” adds Allman.

“And we appreciate that, but we can’t do it for anyone else. We have to do it because it’s real - because there’s a real chemistry, an organic connection. It can’t just be because it looks good on paper. We have to be able to get in a room and have a vibe, to really be able to work together and to feed off each other in a creative way.”

To test out the chemistry, Allman and Betts toured last summer with Duane opening for the Devon Allman Project, before he and Stachela came back out at the end of the night for a set comprised mostly of Allman Brothers music.

It worked so well that the pair started writing together, with an eye toward the formation of the Allman Betts Band, which also includes Oakley, Stachela, keyboardist John Ginty, drummer Jon Lum and percussionist R. Scott Bryan.

The first time they played together was in the studio, recording Down to the River. Since then they’ve logged many shows and countless hours on the road together, getting to know each other better both on and off stage.

“We’ve come a long way, and we’re starting to really stretch out, to take things in different directions,” Allman says. “The cornerstone of that growth is that we have an album out. We’re not just on tour to be on tour.”

“It’s a really good feeling to have this record that we really feel good about as the cornerstone of everything we’re doing,” Betts adds.

Down to the River features songs penned by both Betts and Allman, and several jointly. In broad terms, their voices and approaches reflect their fathers’ different approaches as well.

They both sing lead, with Allman taking a majority with his huskier voice, often on bluesier and more rock-oriented tunes. Betts has a higher, reedy country-tinged voice, and some of his tunes lean toward a Rolling Stones’ honky-tonk vibe.

On stage, three lead guitars can get in the way of one another but Betts, Allman and Stachela have an easy chemistry and alliance, which they say largely occurred naturally and has only deepened with time.

“It kind of worked itself out,” Betts says. “Everybody has their strengths, but the biggest thing is that everyone in this band has the same idea of what we want to sound like and where we want to go. Because of that, stuff kind of works itself out naturally and quickly.”

Allman has seven guitars on the road, usually playing five a night, picking the right instrument for the right spot, while Betts and Stachela largely stick with Gibsons - an SG for the latter, mostly a goldtop for the former.

“As the third guitarist in the band, I’ve got to infuse a certain bandwidth of EQ to not step on toes,” Allman says.

With Allman adding coloring and texture on most songs - he plays leads on several original instrumentals - Betts and Stachela form a striking guitar tag team, harmonizing onstage on Allman Brothers Band classics like Blue Sky and Jessica as well as on their new material like Shinin’ and Melodies Are Memories.

The two Southern California residents have been playing together regularly for more than five years, in between Betts’ touring with his father’s band, and with Dawes.

“Duane and I started harmonizing together almost immediately,” Stachela says. “I grew up listening to the music he was born into, so it was very natural. He was at a very high level when we met and has grown tremendously since then as a player.

“I think we all push each other in a very healthy way. It’s never a competition, but we’re always bouncing ideas off each other and pushing one another. When you’re playing next to someone who’s of a very high caliber every day, you have no choice but to grow.

“It goes back to the original Allman Brothers and their approach. Duane Allman and Dickey Betts entered as great players, but playing together pushed them to a higher level. It’s inspiring and you’re serving the music and you literally cannot help but get better playing with great players.”

As they keep pushing forward in an almost two-yearlong tour, the Allman Betts Band looks to keep that dynamic alive and flourishing, not only between the guitarists, but the band as a whole.

They’re already writing songs for album number two and are looking forward to seeing just how far they can take this thing, as they look to grow ever further away from being identified primarily with their fathers.

“I think the thing that people will realize as they see us is that we may be related to these legends, but we have a strong centerpiece band and a strong record, and we look forward to making fans on the strength of our music and chemistry and on our own work ethic,” Allman says.

“We have a beautiful thing going. Everyone’s world-class and really brings it every night. This is really about our chapter, and we’re still writing it.”

Betts punctuates his partner’s statement of intent with a single, enthusiastic word: “Amen!”

● GUITARS Gregg Allman’s Martin Johnny Cash acoustic, 1961 Fender Stratocaster, 1966 Fender XII 12-string electric, Gibson Les Paul, 1964 Gibson ES-330
● AMPS Victoria in the studio. Live, it’s a ’65 Fender Super Reverb tweaked by Voodoo Amps run A/B with a hand-wired Marshall reissue Plexi. “This gives me the best of both worlds - clean and dirty,” Allman says. “That boosted my confidence and my tone standing next to a couple of world-class players each and every night.”