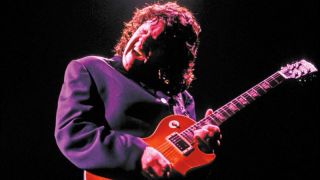 As the '80s drew near its close, Gary Moore had grown tired of playing hard rock/metal and decided to recharge his creative batteries by exploring the blues.

It was a bold but wise move, as the resulting album, Still Got the Blues, became his biggest commercial success and inspired him to spend most of the rest of his career playing the blues until he died at age 58 in 2011.

While Moore plugged into various Marshall amps throughout his career, for this album he adopted a new rig consisting of a prototype of Marshall’s forthcoming reissue of the classic mid-'60s JTM45 head.

To achieve the high-gain overdrive and sustain he desired, Moore relied upon Marshall’s newly introduced The Guv’nor distortion pedal, which was the company’s stomp box interpretation of a JCM800 amp.

The JTM45 was dialed to a clean setting, and the Guv’nor pedal was the sole source of the tone’s distortion. By boosting the midrange with the pedal’s EQ as well as at the amp and playing mostly through the Les Paul’s neck pickup, Moore achieved a gloriously thick, singing tone reminiscent of Clapton’s Cream-era 'woman tone.'

Moore contrasted the fat, sustaining tones of the main melodic line and solos with a very clean tone on the rhythm parts highlighted by a subtle chorus effect. Moore never divulged what he used for the chorus effect on this song, but during the Eighties his rig included various Boss and Ibanez chorus pedals as well as rack-mounted units like an Alesis MidiVerb II and Roland SDD-320 Dimension D.

Judging by the subtlety of the chorus effect, the lush stereo spread and no perceivable pitch modulation, it’s most likely that he used the Dimension D on the studio recording.

TONE TIP: Dial in a clean tone on the Marshall that sounds rich and full with the chorus effect. Engage the Super Badass as a 'distortion channel' for the main melodic line and solos with the midrange cranked up.

GUITAR: 1959 Gibson Les Paul Standard (neck pickup for most of the song, except when he switches to the bridge pickup during part of the solos), Neck Volume: 10 during solos, 5 during rhythm part, Neck Tone: 6, Bridge Volume: 10, Bridge Tone: 10.