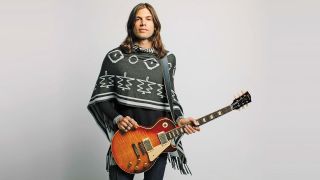 Imagine you’re 20 years old and your band is on tour supporting Van Halen - essentially living the dream of every young American rock and roller. Now imagine that your hero, Eddie Van Halen, suddenly sends his people over to your people and asks that you not perform a spotlight guitar solo during your nightly set anymore. Talk about a potentially dream-squashing moment. Nick Perri, guitarist and frontman of the Underground Thieves, doesn’t have to imagine this nightmare scenario, as it’s exactly what happened to him when his band Silvertide was touring with Van Halen in 2004.

“I think the first emotion I felt when I heard about it was that I was bummed out,” Perri says. “But then I realized something - that I didn’t have to say yes to this request. I mean, if Eddie Van Halen was that age and one of his heroes asked him not to solo, he probably would have said, ‘Fuck you.’ Now, I didn’t say it quite like that, but I did politely refuse to stop playing my solos - and I think Eddie respected that.”

15 years later, much has changed for Perri - Silvertide is inactive, he’s relocated from his hometown of Philadelphia to Southern California, and his Underground Thieves project is picking up some serious steam after first coming together in early 2018. One thing that hasn’t changed for the 35-year-old rocker is that he’s still a rising star in the guitar community - a gutsy, soulful six-string force that commands notoriety and attention in much the same way that Mr. Van Halen noticed him all those years ago. “Things are just going incredibly well in all aspects of my life right now,” Perri reveals. “I’m so grateful.”

After dropping the five-song Capistrano EP last year under the name Underground Thieves + Friends, Perri retooled the project somewhat by shortening the name to Underground Thieves and making some personnel changes so that the lineup now consists of six members in total: Perri and five of his longtime friends originally from the Philadelphia area. The group is currently in the midst of releasing new songs one at a time - the first three being Fall, White Noise and Whole Lotta Money - and at some point will pool all this new music together into a full-length record.

“I didn’t want to put out an album, tour for two years, take six months off, then record another album and keep repeating that cycle,” Perri explains. “Hopefully, by releasing a new song every couple of months, it’s keeping us in people’s minds and allowing fans to stay with us and be excited along the journey.”

As obsessive as he is about his guitar playing, Perri has always been equally maniacal about his gear - or at least he was, up until recently. After spending 15 years or so learning how to tweak, customize, build and rebuild nearly every component on his guitars, Perri had something of a spiritual (musically speaking) awakening one day when listening to Eric Clapton’s solo on the 1966 Cream song Sleepy Time Time. Following the epiphany, he sold all his gear and bought a Les Paul and a Marshall, which is essentially what he started out playing as a teenager when Silvertide first signed a record deal in the early 2000s.

“I basically went full circle,” Perri says. “Most of what you’re hearing me play through these days is a Les Paul, a Marshall JTM45 with Celestion Greenbacks, and a Dunlop Fuzz Face Distortion pedal. With that combo, I’m more satisfied with my tone than ever before.”