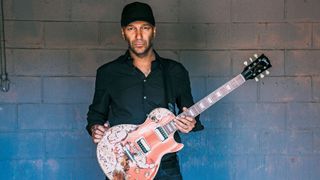 The lights go out in Irving Plaza, a large ballroom in New York City. A spotlight splits the darkness and searches the audience until it abruptly stops. Suddenly, as if by magic, guitarist Tom Morello rises from the middle of the crowd on a small platform, peeling out lick after mega-lick on his wireless guitar. Meanwhile, on the stage, more than 75 feet away, a gigantic LED screen explodes with provocative images while a live rhythm section churns out the funky groove to Lead Poisoning, one of the heavier songs from Morello’s wildly eclectic new album, The Atlas Underground.

It’s a goosebump-inducing moment. The first of several in an evening filled with rousing social anthems, unhinged guitar solos, spectacular visuals and a moving tribute to the late Chris Cornell, Morello’s Audioslave bandmate. The guitarist eventually makes his way to the stage, but not before making a deep connection with the fans in the packed auditorium.

Sounds about right! Not since his heyday in Rage Against the Machine has the guitarist created such innovative and exciting music. So why hasn’t the guitar community embraced this new Underground with the same fervor? Perhaps it’s because Morello has dared to challenge the standard rock format by incorporating EDM and modern hip-hop elements into his ever-widening vision.

Or perhaps fans were confused by the album, which features numerous guest vocalists like Gary Clark Jr., Marcus Mumford, Portugal. The Man’s John Baldwin Gourley and rappers like Killer Mike, Vic Mensa and RZA from the Wu-Tang Clan. Morello is painting outside of the lines, and won’t stop this experiment anytime soon.

What was your concept for the Atlas Underground album?

It’s sonic conspiracy in a way. I wanted to find a way to inflict my guitar vision on a new generation. It’s a kind of a Trojan horse record for electric guitar. I wanted one foot planted on a Marshall stack and another in the world of 2019 sonics.

There seems to be an insane amount of guests on the album. Could you explain the reason for doing this?

There are about 20 collaborators on the record, which was intentional. I wanted a record that was curated by me and driven by my guitar playing, but at the same time have collaborative partners who would help me find interesting musical and artistic surprises. In addition to rock and rap artists, I also worked on tracks with a lot of DJs like Steve Aoki and Pretty Lights, which was exciting and challenging.

I’ve made 19 studio records, right? And 18 of those have been recorded with a band standing in a room, toe to toe, and looking each other in the eye. I’ve done that. So, I asked myself, “How do I create a new and different guitar record?” When I conceived this album, I had lofty ambitions. I wanted to forge a new genre of music; something that had the bones and bass drops of EDM, but the meat of rock and roll. That hadn’t been attempted on an album of this scale.

Why haven’t there been more attempts by guitar players to work with DJs and rappers, or be on the cutting edge of modern pop music? Have guitarists become lazy?

I don’t know if they’re being lazy. The reason most people pick up the guitar is because they love other guitar players, right? There’s nothing wrong with that, but there’s an inherent conservatism in that way of thinking. I didn’t start playing guitar until I was 17, and initially my role models were players like Randy Rhoads and Steve Vai. It was a little frustrating, because even though I practiced obsessively, I knew it would be difficult to develop that kind of technique in a short period of time.

I wasn’t going to let that deter me from being a musician, and when I started playing with Rage Against the Machine, I had an epiphany - I suddenly decided that I didn’t need to play like Van Halen, but that I did need to find my own lane and my own voice, which opened up a world of sonic possibilities.

In some ways, that hasn’t changed. The idea of this album was to make a record that was very forward and progressive, but also featured, to the best of my abilities, some extraordinary guitar playing.

The guitar is often left out of the current musical conversation.

Yeah, I know a lot of young people who have never been to a concert where there’s been a live guitar player in the band. The guitar is not even on their radar. Whether you listen to pop, alternative rock or hip-hop, it’s very rare to hear a guitar part in the front of the mix, let alone a guitar solo. So, I was very happy when Every Step That I Take, a song I recorded with Portugal. The Man for this album, actually charted. It’s one of the few hit alternative rock songs over the past decade that features a screaming guitar solo. So, to some extent my mission was accomplished.

Did you experiment with software amps to mesh with the electronica elements on the album?

I’ve never really explored digital amplification. Truth is, I’ve used the same setup since the late Eighties. As a young man, I quested for the perfect sound. Then one day in late 1988, frustrated, I spent a couple of hours of rehearsal dialing in my amp and guitar sound to the best of my ability, and I marked those settings and they haven’t changed since. That amp will be played at the show tonight with those same settings and that same guitar. Rather than chasing some imagined tone, I said, this is my tone and now I’m going to create with that and let the chips fall where they may.

Will there be more Atlas Underground?

A couple of your guitars are being featured in the Play It Loud exhibition at the Metropolitan Museum of Art in New York City. Was it an honor to have your instruments in one of the world’s greatest art museums?

The whole exhibition is so, so stunning. As a guitarist, it’s amazing to be in such close proximity to the guitar Jimi Hendrix played at Woodstock and the Les Paul Jimmy Page played on most of the Led Zeppelin records, which is right next to Eddie Van Halen’s Frankenstein guitar and Eric Clapton’s main Stratocaster. Then there’s Chuck Berry’s Johnny B. Goode guitar, and weirdly, my guitars.

I didn’t understand the full magnitude of the exhibition until I went to museum. It was a crazy and very surreal moment. I’m from very humble guitar beginnings, so to have my instruments in a museum that I love, along with these historic guitars is just incredible. Fucking nuts, dude!