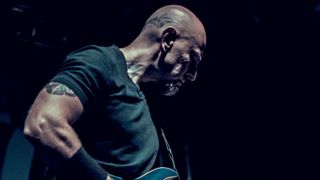 Demir Demirkan has metal in his blood - and in his name. The Turkish native, who was raised on a steady diet of Deep Purple, Rainbow, Judas Priest and Yngwie Malmsteen before relocating to the U.S. some years ago, was born with a name that literally translates into English as iron iron blood (Demir meaning iron and Demirkan meaning iron blood).

With a moniker like that, how could he not embrace his destiny as a rising heavy metal talent? “I didn’t really have to think about what career I was going to pursue,” he says with a laugh.

Despite his Halford-esque shaved head, goatee and tattoos, Demirkan is anything but a one-trick metal god. Over the course of his near-30-year career, the singer and guitarist has lent his songwriting, playing and composing abilities to all sorts of different musical projects in the US and in Turkey, where he maintains a highly successful career as a musician and producer.

Guitar concertos, acoustic records, Turkish folk music, film scores, symphonic works - you name it, and Demirkan has probably done it. The 47-year-old’s latest offering is the hard-rocking album Elysium in Ashes - led by the Alter Bridgey singles Bring It On and This I Swear - his first full-length to be written and sung entirely in English.

“If I decided to do this album in Turkish instead of English, everything would be different - the melodies, the riffs, the grooves, everything,” says Demirkan, who can shred with the best of ’em and considers a custom-built Warmouth, a Jackson RRT-5 Randy Rhoads and a Zakk Wylde model to be his go-to axes at the moment.

“I knew from the beginning that this was going to be an English record, and your mindset is totally different when you’re writing in English compared to Turkish. Your subject matter and how you approach it is all different, because there are elements of American culture that don’t translate into Turkish and vice-versa. There are things you just can’t write about when you’re writing in another language.”

After growing up in various cities in Turkey, including Adana, Izmir and Istanbul, Demirkan relocated to the U.S. and spent time living in Los Angeles, Chicago and New York City.

Today, he calls Austin - where he lives with his wife and 3-year old son - his home away from home. The musician certainly knows how to command a U-Haul, and finds great benefit in this modern-day nomadic lifestyle.

“It helps me develop as a person, and it also helps me put out more diverse music and be more creative in what I do because I get to meet new people and learn new cultures and languages,” he says. “I think it helps you grow up and mature as a person.”

Demirkan has enjoyed bona fide celebrity status in Turkey for many years, but his career is just getting off the ground in America. Given his stardom overseas, would he ever consider moving back to his homeland?

“Probably not. I have a home there, a career there, we go there all the time and my parents are still there - so in that sense I could never leave Turkey. My son is being brought up in Texas, and my life really belongs to him right now, so I think we’re going to stay here for a while.

"It’s very hot in Austin like it is in my hometown in Turkey - the only thing I’m really missing here is the Mediterranean Sea and the blue waters. But this will have to do for now.”