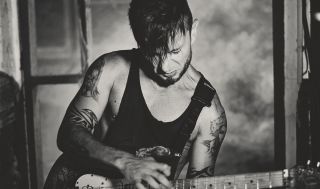 In this Monster Lick, I'm using the E blues scale. This also is known as the flat five pentatonic scale. The notes in this scale are E, G, A, Bb, B and D.

This lick ventures way outside the traditional blues use of this scale.

It always amazes me how the same six notes, when played with a new spin, can have such a drastic impact. Obviously, speed is a factor here, but for the most part it's all about accentuation or a focus on the flat five note, the Bb.

You'll notice throughout the lick that I'm utilizing the dissonance of the flat five to create the intensity of the tonality. This enables me to use this traditional blues scale in a more ferocious environment - sonically and musically.

Because my influences are the greats of blues-rock guitar - Jimi Hendrix, Eric Clapton, Stevie Ray Vaughan, etc. - I wanted to be able to stick to the same tonality but adapt it to the heavier, more aggressive style of music I tend to lean toward; certainly in the rock genre, anyway. Don’t get me wrong; there's nothing I love more than blasting away over a slow blues, but my natural style is on the heavier side of rock.

The lick features legato, wide intervals and tapping. Notice the use of the flat five note; you'll see how I use this note almost as a pivot point in the first half of the lick to create the intensity, at least tonally.

From there I move into the tapping section. You'll notice I tap three consecutive notes with my second and third fingers on my right hand. I always keep grip of the pick with my thumb and index finger to help with the transitions in and out of the tapping.

The next section is by far the trickiest. It requires hard hammering with the left hand to sound the notes correctly while transitioning up and down the neck. It looks cool and sounds even cooler, so it's well worth the effort!

Please reference the video and transcript below and work through each section at your own pace. Most of all, have fun!

Australia's Glenn Proudfoot has played and toured with major signed bands and artists in Europe and Australia, including progressive rockers Prazsky Vyber. Glenn released his first instrumental solo album, Lick Em, in 2010. It's available on iTunes and at glennproudfoot.com.