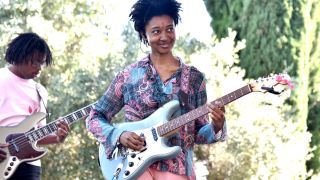 Regardless of how you feel about the ever-increasing (and often distracting) role social media plays in modern life, Instagram has inarguably been a massive boon to guitar culture over its near-decade in existence.

Lurking amid the wildly popular photo-sharing app’s endless stream of influencers, dog and cat videos and asinine viral challenges exists a diverse world of guitarists, gear manufacturers and retailers posting killer photos and videos (aka 'content') showing off what it is they do, educating followers on how they do it and demoing everything from the latest gear to the most coveted, exotic and esoteric vintage finds.

Instagram is also where players meet and interact these days (it does indeed go down in the DMs), where inspiration strikes, and where the lion’s share of guitar trends will live and die in 2020.

The brilliant thing about Instagram as a platform for musicians is that if you’re consistent in your work, offer something unique as a player and crack the code of how to harness the platform’s nearly unlimited broadcasting potential, Instagram has proven itself to be truly fertile grounds for a great career in the physical realm.

The sky truly is the limit for Instagram guitarists, and it’s in that spirit that we take a look at a sampling of players who have used the app to seriously impressive effect over the past few years.

Los Angeles-based session and touring pro Mason Stoops initially emerged as a creator of innovative and entertaining demo vids for companies like Eastwood Guitars at a time when most gear demo clips still very much sucked.

Stoops is a gifted and versatile fingerstyle player with a real knack for squeezing the most out of gear and became first call for many gear companies that recognized the young guitarist’s ability to display their wares in the best possible light through his unexpected and dynamic technique.

While Stoops’ star initially rose through Instagram and gear demos, he’s parlayed that profile into a career as an in-demand session player for the likes of luminary producers like Tony Berg, and he recently became a touring member of legendary singer/songwriter Jackson Browne’s band.

Faye is one of the most intriguing stories to come out of the Instagram guitar zeitgeist, and a perfect example of how the next generation of guitarist has flourished through tech.

Faye first picked up the guitar after falling in love with Eric Johnson’s anthemic Cliffs of Dover on the Guitar Hero video game. Once a prodigious bedroom player with deft, soulful chops, Faye went viral after R&B darling SZA reposted a clip of the young guitarist playing an unfinished original tune.

Several (very loud) cosigns from John Mayer followed, and Faye has since gone on to perform with the rising icons of the new generation like Mac DeMarco, Noname, Maggie Rogers and Willow Smith.

I’m in the UK! Let’s do this. Kicking it off this weekend up north! Tickets are moving quickly for certain dates. Don’t wait on grabbing yours! Can’t wait to see you all! Tix at arielposen.com 🇬🇧⚡️(📷 @kellirp // 🗺 @sebi.white) Ariel Posen

While the man is also well known for his work with award-winning roots group the Bros. Landreth, Posen’s Instagram profile is a popular place for anyone looking to glean a bit of the bottleneck magic, something that has put him on the shortlist of contemporary players pushing the slide idiom forward.

Justus West’s Instagram account is loaded with play-along clips of him absolutely ripping over a wide variety of current pop and hip-hop. Also the recipient of a John Mayer cosign, West’s style of guitar is athletic and extremely contemporary, but always melodic and focused around working with a song rather than over it.

West’s Instagram clips (and YouTube channel) have played an integral role in delivering him gigs with megastars like Snoop Dogg, Ariana Grande, Future and the late Mac Miller.

Boasting more than 950K followers, Brazilian-bred and L.A.-based guitarist Mateus Asato was hailed by Forbes in a 2018 profile as an 'Instagram rockstar' and is one of the most visible players to come from the social media generation.

Asato also made our Guitarists of the Decade top 20 list, and with good reason.