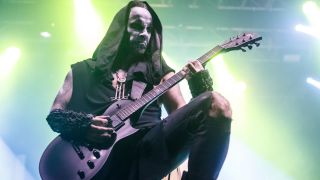 When he’s not leading Polish extreme metallers Behemoth and agitating religious conservatives across the globe, he’s spinning eerie tales in his dark blues side project, Me and That Man.

But what GW readers really want to know is...

How long did it take you to learn to play guitar and sing at the same time? Also, was it scary transitioning to Me and That Man’s clean vocal style? - Nicholas Angelo

"You know what’s the scariest? The worst is having no guitar, and just doing vocals. [Laughs] That’s the worst. Every guitar player that sings will tell you that. I’ve always had a guitar and been a songwriter. I couldn’t even play well for years, and I would keep making songs, writing lyrics and singing along.

"I had this vision and it took me at least a decade or longer to become an okay instrumentalist. It’s still tricky. We did a tour preproduction and I found out it’s not going to be super-easy to perform Rom 5:8 off the latest record. Because when we did the record, I never rehearsed singing the songs. I leave the singing for the vocal tracking. Then I have to relearn the whole thing [for the tour].

"Honestly one of the reasons there’s backing vocals in Behemoth live is that sometimes I cannot pull it off. Sometimes it’s too much vocal traffic, and I’m going to kill my voice. And then it’s also attractive for the spectators to see the band performing and the interaction between the vocals. It’s always cool, plus it makes it easier for me to pull it all off."

I love that you use White Falcons in Me and That Man. How’d you get hooked up with Gretsch? - Halelly

"Ah, yeah. It’s a funny story, and tragic too. I had my Gretsch guitar, a White Falcon, that I got years ago… I had it in Poland. When I was in the U.S. to shoot the first Me and That Man video for Cross My Heart [from 2017’s Songs of Love and Death] I reached out to a friend of mine, Mark, and he reached out to Gretsch to lend me this beautiful White Falcon just for the video shoot.

"They granted me the guitar, and we got the amazing desert shots. But… bad luck! I was in a really bad condition at the time - no sleep, some personal drama, frustrations - and I placed the guitar in front of the car. So, when the guy said, “OK, let’s move on,” I forgot to take it from the ground. So we ran over that $5,000 guitar!

"[Laughs] It’s funny now, but then I had tears in my eyes! We called Gretsch, and they gave me an artist price, and I paid that, of course. So the video cost me! [Laughs] Right after that, I got a Gretsch deal. I got two White Falcons and a black one. I don’t think I got a deal because of that. [Laughs]

"They just decided to put me in their artist roster, which is amazing. For extreme stuff I’m with ESP, and for blues whatever, I’m with Gretsch because they’re the best guitars for that.

When you’re writing, how do you know if a riff is a Behemoth thing or a Me and That Man thing? - Isaac Benrubi

"That’s easy. It just feels right. I’m working on this song right now that has this dance, bluesy vibe. And if I approach it with a bluesy drum beat I can still make it a Behemoth song by adding extra guitars and an extreme twist.

"For example, Bartzabel [from 2018’s I Loved You at Your Darkest], the groove I could probably use for Me and That Man as well. But some [Behemoth] songs are just getting more bluesy and stripped down, not so much shredding and fast picking.

"Not that I’m done with that, but our spectrum has widened. We can do way more than we could have 10 years ago. I opened myself to different sources. But I just play… And I know the more eerie, evil stuff is usually designed for Behemoth songs, and the stuff that’s more loose and mellow is usually Me and That Man."

You collaborated with awesome people on the new Me and That Man record [New Man, New Songs, Same Shit, Vol. 1, Napalm Records]. Can you talk about the song with Corey Taylor and Brent Hinds, “How Come?” - Ollie

"I have no words to express how humbled I am… With Corey, I never believed it would happen. This is one of busiest artists on the planet. Two big, big bands. I’m just this guy with an idea, a vision, from Poland in an extreme-metal band. Before we even met [I heard] he would play Me and That Man on his podcast.

"So I was like, 'If you like that, maybe the next step would be to contribute.' For some reason he said yes. I told him, 'Maybe we’ll do dialog vocals where you sing, and I reply.' Then when I heard it… it was so good! I told him, 'Man, it stays how it is. I’m not adding any extra notes.'

"Brent from Mastodon laid down one lead on the Corey Taylor song, and Rob Caggiano from Volbeat, and ex-Anthrax, did the other lead. Working with Brent is another thing. He’s so out of his mind! He’s an alien. You can hear it in his playing. It took us a while until we got to the right lead, but when you hear it… it’s a great conglomerate of awesome individuals that are sharing that energy."

I read you once visited a cannibal priest in India. If he would have offered you food, would you have eaten it? - Neil

"[Laughs] I was talking about the Aghori sadhus. Aghori is a tribe, the local saints that feed on - basically, they eat remains from humans… They believe the human body after death is an incarnation of Lord Shiva, the biggest deity in their pantheon. And by consuming the flesh they absorb his energy and powers and magic. I understand the question is joking around, which is cool. But, I would probably not [have eaten it]! All I got was prayer beads as a present from the guy."

What guitar theory or technique do you wish you could have learned earlier in your career? - Jonas Pyk

"So, my first answer would be, I should have learned how to read notes because it would be so much easier to operate and talk to other musicians. But honestly, I’m so bad with names and math, and I’m not even familiar with chord names. I just grab chords and play by my heart. It’s a gut feeling. I try not to overthink. Because music is within me and I need to find my way out. I don’t really need math to do that…

"So, Jonas, go and learn notes, but then again forget about it and just use your fucking guts to play music. And if you’re really passionate about it and really have something to say, you will say it through your instrument regardless."

Would you ever think about maybe using an eight-string guitar on a Behemoth album? - Chris Spaulding

"No! [Laughs] We started using seven-strings around the Zos Kia Cultus era [circa 2002], just trying to get a different vibe, notes, tones and flavors. It was cool back then. We played for years with seven-strings… but honestly these days I hardly pick up a seven-string. I’m not saying I’ll never go back. It’s just about my needs.

"I try to stay adventurous on my artistic path. But I’m also open and spontaneous and you never know. If I feel like only using six strings, I just go with it. So that’s what I’m focusing on now. Actually, I’ve got a new signature six-string ESP [LTD NS-6] model that came out at NAMM."

Since beating cancer [In 2010 Nergal received treatment for leukemia, which has since thankfully gone into remission], I’ve read you’re much more conscientious about your health. When you tour the U.S., what’s your go-to place for healthy food on the road? - Alicia

"One of the reasons I love touring the U.S. is fucking Whole Foods! [Laughs] I’m a devotee! I worship those places. As long as there are Whole Foods around you’ll see Nergal smiling. It’s anything from healthy kombuchas, great coffee, wine, soup, salad, protein. Anything I want is there! I really wish there was one in Poland, but there is not, yet."

Will we be hearing any brand-new music from Behemoth at any time this year? - Paulo

"Let’s put it this way: it’s not the newest music, but for everyone it’s going to be new music. It’s going to be unreleased music. I don’t want to spoil anything, but in the upcoming months there’s going to be some really cool stuff…

"Man, I must say I’m fucking bursting with new songs, new ideas, new options and everything. There’s already several ideas demoed for the next Behemoth album. It’s cool; this is really the best period for Behemoth ever.

"It’s the biggest tours, the best tours and best reception from the fans. We are really at the peak of our career: great shape, fucking hungry and ready to go."

What’s your songwriting process like? Do you start with the riff and then build off it? Or do chord progressions always come first? - Alan Kawula

"It depends, there’s not one way or formula that I copy and paste. I can tell you [one way] of building a song… Let’s say I have a riff, let’s call it a 'question' type of riff. There always must be an 'answer' type of riff.

"I really like to play with the dynamics. I bring the riffs that are pretty intense, fast picking a lot of notes, and I immediately think of an answer to that riff that’s going to be a contrary thing. Like if something is very dense, I’ll think of an open, breathing riff. There’s billions of notes here, let’s make a contrast of two or three simple chords.

"If the guitars go with simple chords with airy, spacy stuff, then I’ll ask [Behemoth, bassist] Orion, 'Can you go fucking nuts with this part?' I always think of black-and-white dynamics with songs. Especially on the last two records, [2014’s] The Satanist and I Loved You at Your Darkest, you can hear that."