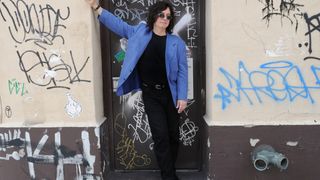 Following the news of Alan Merrill's passing on March 29 2020, Guitar World has unearthed our final, never-before-published interview with the Arrows frontman, conducted in March 2019, during which time Merrill was promoting then-new album Radio Zero.

In the candid conversation, Merrill revealed the songwriting history behind his most famous hit, as well as his favorite cover versions over the years.

Alan Merrill’s I Love Rock 'n' Roll is one of the most covered rock tracks of all time. Often assumed to be a Joan Jett song, it actually was released as a single in 1975 by Merrill’s UK-based band, the Arrows. Jett saw them perform it on their own TV show while in England and hit the jackpot with her version in 1981.

Although the song is credited to Merrill and bandmate Jake Hooker, it was actually a solo Merrill composition. In return for Hooker paying his airfare to the UK from Japan in 1974, Merrill says he agreed to give Hooker a co-writing credit for the Arrows’ B-sides, which was the intended destination of I Love Rock 'n' Roll.

The label flipped it from the B-side to the A-side just prior to release - but nobody realized what the financial implications would be.

“Jake won the lottery with that air ticket,” Merrill jokes now. Giving away a 50-percent royalty on one of the most-recorded songs of all time has to hurt, but Merrill is philosophical about it.

“Jake saw that I could bring something to the band when he paid for my airfare. If I hadn’t hooked up with Arrows maybe I wouldn’t have written the song, and everything would be very different for me now - financially, anyway.”

Merrill’s new album, Radio Zero, is his strongest to date. The overall feel is upbeat and rocking. The songs Don Quixote Absolutely and Goodbye Rock ’n’ Roll Heroes refer to his experiences in the UK in the '70s.

“I’m writing my autobiography and I’ve been reminded of a lot of things,” he muses. “Mistakes we made as a band and also mismanagement by our record company. I think we were also a bit naïve. With hindsight, I would’ve done things differently.

“When I think back to how little money we were making and how many people I knew that had to leave the business to work in regular jobs, I feel lucky to have kept working, playing guitar with Derringer and Meat Loaf, before focusing on my solo career.

“Everyone knows Joan’s version of Rock ’n’ Roll, but ironically that wasn’t the one that made me a lot of money. I do think Joan did a great job on it, but I think maybe my favorite is L.A. Guns’ take. There are so many covers out there that I probably haven’t even heard half of them - but I’m glad I wrote it!”