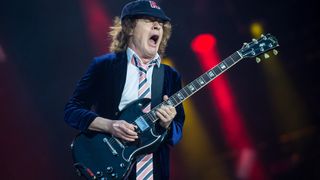 Few rock guitarists have ever earned the same respect from the blues world as Angus Young. There’s an undeniable, tangible honesty to AC/DC’s music that paid homage to the very roots of rock ’n’ roll, sticking to the traditional formula of a few easy chords and powerful pentatonic licks.

Along with his brother Malcolm, who sadly passed away in 2017, Angus’s raw and uncomplicated tones echoed that essence of sonic purity - favoring a more direct and undiluted kind of attack.

With rumors of the icons being back in the studio reunited with singer Brian Johnson, who they had parted ways with in 2016, we thought we’d look at the recipe for those world-conquering guitar sounds.

One thing to remember is that while Angus Young’s signal path has been long renowned for its simplicity, it’s one that works because of the sheer quality of its combined ingredients.

There are no pedals to hide behind - you need a good-sounding humbucker-equipped guitar running through a mid-rangey and vintage-sounding tube amp. The rest of the tone, as he’s so often reminded us, comes from the hands…

Although he’s been occasionally spotted holding a Les Paul, ES335 and even a Fender Mustang on one occasion - there really is only one guitar associated with AC/DC’s duck-walking lead maestro. And it would be fair to say his loyalty to the Gibson SG has never waned…

“I liked the SGs because they were light,” Angus told Guitar World in 1984. “I tried Fenders but they were too heavy and they just didn't have the balls. And I didn’t want to put on them DiMarzios because then everyone sounds the same. It's like you're listening to the guy down the street. And I liked the hard sound of the Gibson."

Gibson Custom Shop 1961 Les Paul SG Standard Reissue Stop-Bar VOS - $4,199
If you’re going to go big, you might as well go all the way. This 1961 reissue from the Gibson Custom Shop is the most expensive SG in production. It comes in a classic Cherry Red and features a 1-piece Solid Mahogany body, two Custombucker Alnico III pickups, an ABR-1 Tune-o-matic Bridge. It will have the perfect grit and hairiness for those biting Young tones and holds its value well.

Gibson SG Tribute - $1,099
The Tribute might be the cheapest in the Gibson SG family, but you’re still getting a very high quality, American-made instrument that looks every bit as classic as the SG Standard or the Standard ’61 from the relatively new Original Collection.
The only snag? Well, the 490R and 490T aren’t exactly Gibson’s best - though at this price you could always swap them out for some wax-potted Seymour Duncans, as Angus himself has done over the last decade or so.

Epiphone SG Special VE - $179
This SG Special from Epiphone currently retails for $179 at stores like Guitar Center and Sweetwater - which may leave you wondering how it’s even affordable to produce. But, fret not, its build quality holds up well enough and the tones are definitely in the right ballpark for hard rock thanks to two ceramic humbuckers, the 650R in the neck and 700T in the bridge.

That infamous AC/DC crunch is one of the most classic examples of Marshall magic. Save for a few television appearances with an Orange OR100, and dabbling with Wizard Amps in more recent years, the Marshall logo has proudly followed Angus wherever he goes. It’s a tradition which continues to this day.

On Back In Black, he used various Super Leads including a ’76 1959, on Let There Be Rock and Powerage it was predominantly late-'70s Marshall 2203s. Elsewhere he’s been known to use other Marshalls like the JTM45, 1959SLP, Super Bass, 9001 Tube Preamp and 1974X - which might explain why the guitarist has been seen using up to 10 different heads for their live performances.

Friedman BE-100 - $3,799.99
Admittedly, Angus is a Marshall man through and through - but if you have the right kind of funds, it might be worth investigating American boutique builder Dave Friedman’s range of products.
The BE-100, in particular, is considered one of the best modded Plexi-style amps to have ever been produced, harking back to those game-changing Marshall glory years.

Victory V30 The Countess MKII - $1,399
Co-designed with Guthrie Govan, widely considered to be among the greatest guitar players of all time, this update on the popular V30 by British manufacturers Victory makes it one of the most versatile and best-sounding amps of its kind.
It has two channels, each with a crunch mode, plus a NOMOD switch to access the original V30 circuit, a low power mode and series effects loop. If you’re on the hunt for boutique tones without the boutique price tags, look no further.

Marshall DSL20CR Tube Combo - $599.99
Don’t be fooled by its compact size, this 20-Watt combo powered by two EL34s is impressively loud and packs more than enough gain to get you to Sin City. There’s an adjustable power level for home practicing, but it’s loud enough for band rehearsals and live performances too, with the added bonus of built-in reverb and an effects loop.

Considering Angus’s signal path is pretty much as basic as it gets, there’s not really much needed on the pedal front here. The only pedal he used on AC/DC’s last tour was a Rocktron Hush at a very low setting for a discrete noise reduction that didn’t squash or suck his tones - operating more like a gate to control the noise coming from running vintage Marshalls at full blast.

“I found that pedals were too much to fool around with,” Angus once told Guitar World. “You’d be halfway through a solo and the batteries would go dead and conk out. And if you tread on the lead going to the pedal, something would always go wrong. Or some crazy kid would pull the lead out just at the moment when you're about to do your big number on it.”

TC Electronic Hall Of Fame 2 Reverb - $148.99
While a lot of AC/DC’s guitar tracks could be described as bone-dry, they have used reverb used on tracks like Highway To Hell, You Shook Me All Night Long and If You Want Blood (You've Got It) - perhaps most noticeably on intros, or any parts with the guitar unaccompanied, and solos. This relatively inexpensive reverb from TC Electronic would be a worthy consideration.

Xotic EP Booster - $120
With no pedals on stage with him, it’s up to Angus’ engineers to ensure his signal gets boosted for the solos. Assuming you’re not playing stadiums with a team of audio specialists at hand to take care of these things for you, it might be worth investing in a pedal of some sort.
This small unit from Californian maker Xotic is a recreation of the legendary EP-3 preamp used by the likes of Jimmy Page, Eddie Van Halen and Eric Johnson and offers up to 20dBs of unadulterated boost.

Solodallas The Schaffer Replica Classic ~ $370
Created by Italian superfan Fil ‘SoloDallas’ Olivieri, who spent 30 years acquiring the right gear in his quest to sound like Angus, this pedal replicates the preamp of the Schaffer-Vega wireless system AC/DC used live and even in the studio.
It would serve as the ultimate ‘always-on’ pedal to hone in on that vicious crunch the group popularized, though also offers a 30dB boost and compression.
Around the release of Back In Black, the AC/DC guitarist told Guitar World, “I’ve been using the Schaffer-Vega since ’77. On the receiver you’ve got like a monitor switch you can boost the signal and in the transmitter you’ve got the same sort of thing. You can really give a guitar hell with ‘em. I have used the remote in the studio and it worked really good.”

Angus has always played 9-42 gauge strings and has been an Ernie Ball endorsee for around four decades.