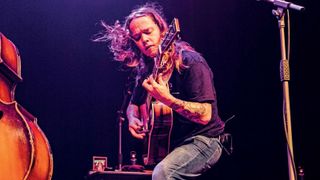 Billy Strings has already packed a lifetime’s worth of flatpicking into his 27 years - and that’s no exaggeration. Born William Apostol, the Michigan native, who just released his second solo album, Home, was immersed in the sounds of bluegrass legends like Bill Monroe, Ralph Stanley and Doc Watson practically from birth by his father. By the age of three, he was playing guitar himself.

“My dad taught me G, C and D and gave me a capo, and I could play just about any bluegrass song,” Strings says.

Within a few years he was performing in earnest. “My dad and I would go down to the VFW hall and it was, like, a bunch of 70-year-olds with music stands playing old country tunes - the same crowd as the bingo crowd,” Strings says with a laugh. “We would pick with those folks every once in a while and I loved it. So I knew that being a bluegrass musician was what I wanted to do since forever.”

These days, Strings is not just a bluegrass musician - he’s quite possibly the most electrifying bluegrass picker around, with a devastatingly clean and precise flatpicking technique that is showcased in racing rhythm runs and speedy solos.

And while his music is clearly rooted in the traditional sounds he was weaned on, as Home demonstrates, this is hardly your grandpappy’s bluegrass. Rather, Strings infuses his old-timey approach with elements of rock, country, folk, psychedelia and even metal.

In fact, Strings actually is something of a former metalhead, having played electric guitar as a teenager in a grindcore band called To Once Darkened Skies. Which isn’t as bizarre as it sounds. “I see a lot of similarities between metal guitar and mandolin,” he says. “Especially in the tremolo picking.”

But it’s all just music. “I’m not claiming to be a bluegrass artist or a rock artist or any one type of artist,” he says, adding, “when we play shows we see all ages, all shapes and colors and sizes - everybody from old-school bluegrass fans to metal-heads. So I’m not worried about genre or anything like that. I’m just making music.”