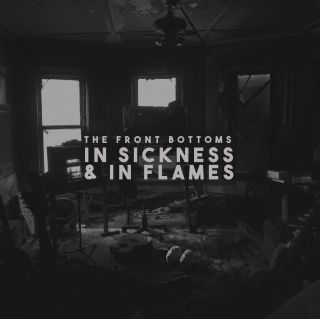 THE FRONT BOTTOMS
In Sickness & In Flames
FUELED BY RAMEN / WARNER

After 2015’s Back On Top delivered some of The Front Bottoms’ quirkiest and most experimental gear to date, its follow‑up (2017’s Going Grey) was a major slip down the staircase: tired, stagnant, and its musical departures sounding far too forced for comfort (especially given the album’s narrative of midlife crises and coveted nostalgia).

In Sickness & In Flames doesn’t just throw singer/strummer Brian Sella and drummer Mat Uychich back into chaos mode – not even their fiercest obsessives could predict the super‑manic rollercoaster of shred and synth this album doles in excess – it has them downright overdosing on eccentricity. Make no mistake: this record is truly, utterly, uncontrollably off-the-rails. And it’s golden.

Guitars on the disc are unexpectedly spicy at times. Sella’s trademark beaten, scraggy and honeyed strum lingers around every corner, but it’s rarely a track’s focal point – choruses rein in deep, gravelly electric juts and vicious wallops of distortion, while mid‑song detours throw wide, wailing feedback into the foreground for some added ‘oomph’.

“Montgomery Forever” and “Leaf Pile” are prime examples of Sella’s big six-string moments, while cruisier jams like “The Truth” and “Love At First Sight” embrace cooler, more summery acoustic melodies. There’s a wobbly, country‑esque edge to Sella’s fretting on “The Hard Way”, which is polarising at first but quickly cements itself as an album highlight.

Gifting the record a slick of his signature downbeat whimsicality, producer Mike Sapone’s fingerprints are painted all over Sickness; not just in the overdriven riffs and sober rawness he has a knack for wringing out of bands, either, but too in the twangy, glitchy ebb and flow, the sharp plot twists and pseudo-psychotic interludes. Sapone is the last collaborator we’d’ve imagined The Front Bottoms seeking out, and the end result of their meshing is something immediately and immensely intriguing.

Like all The Front Bottoms’ records, Sickness serves to fossilise a very specific set of times, places, moods and atmospheres – these a little more uncertain than usual, and certainly some more tense and turbulent.

The duo tracked the album before all the great calamities of 2020 unfurled, but it feels emphatically suited for them. One moment, it’s all cutesy and chill – the next, you’re hoping Sella’s next therapy sesh isn’t too far off. Altogether, LP5 is nigh-on an hour of a glowingly tight, stunningly dynamic and absolutely essential pop-rock.