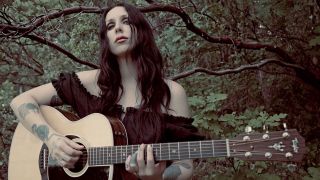 Chelsea Wolfe was on the heaviest tour of her life when she decided to make an acoustic record. It was 2018, and she had just released Hiss Spun, an album of sludgy, doom-laced metal that opens with shrieking feedback and ends with the sound of a scraping tractor.

“Our tour schedule was pretty heavy, and obviously the set was really heavy,” Wolfe says. “Plus we were opening for Ministry, so sometimes we’d dig in and get really heavy, really aggro. Things just got super heavy all around.”

When it all got too much, Wolfe would hole up in the back of the tour bus with her acoustic guitar. “I just started writing these songs that felt really calming against the chaos of everything,” she says. “A lot of it was about trying to find a place I could call home.”

The result of her trips to the back of the bus is Birth of Violence. Recorded in her home studio in the mountains of Northern California, Birth is a rare gem: an album as haunting, sprawling and heavy as many of Wolfe’s metal counterparts, but consisting almost entirely of acoustic music.

With few exceptions, Birth is a one-guitar album, recorded entirely on her Taylor 416ce. Coupled with Wolfe’s confident, minimal fretwork, the 416 sounds expansive - a clean, powerful spine driven, like a stake, through the songs’ murky arrangements.

And with no pedals or amps to hide behind, Birth of Violence is a reminder that all good songwriting - heavy or otherwise - is just a matter of the right chord played at the right time.

“To me, it feels very much like an American folk record,” Wolfe tells us. “But a really fucked-up version.”

Birth of Violence is available now via Sargent House