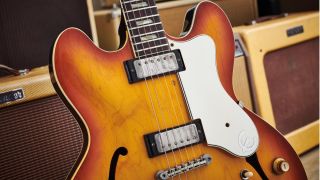 Epiphone guitars have a chequered history. During the 1930s, the New York-based firm posed serious competition to Gibson in the burgeoning jazzbox market.

Unfortunately, however, following the death of company founder Epaminondas ‘Epi’ Stathopoulo in 1943, and in the wake of World War II, Epiphone became plagued with problems. The brand’s steady decline during the post-war period eventually came to an end when Gibson’s owners CMI acquired it in 1957.

At the same time, Gibson president Ted McCarty was leading the Kalamazoo plant into a particularly fertile period of innovation, and while some of the most groundbreaking designs in guitar building history were developed, Gibson and Epiphone thrived under the same roof.

The ES-335T (later designated as the ES-335TD) is often recognised as being the most significant new model developed during this period. Unveiled in 1958, it pioneered a unique semi-hollow doublecutaway thinline design that set a template for all that followed. Its Epiphone-branded equivalent, the Riviera E360TD, appeared later in 1962 priced at $325 – at which time the ES-335TD was listed at $300.

Although 335s command a far greater price on the vintage market nowadays, this clearly demonstrates that Epiphone guitars made in Kalamazoo were not intended as inferior instruments in terms of quality.

Aside from some typical Epiphone hallmarks including mini-humbuckers, Frequensator or Tremotone tailpieces, single parallelogram fretboard inlays, and headstock profile, Rivieras share much in common with 335s.

The evolution of the Epiphone Riviera

Sporting a solid maple centre block and measuring 16 inches wide by 13/4 inches deep, both instruments feature a laminated maple body construction with single top and back binding and unbound f-holes.

Additionally, both instruments have a one-piece mahogany neck that joins the body at the 19th fret, a 243/4-inch scale length, and a single-bound 22-fret rosewood fretboard.

The E360TD was originally listed with a Royal Tan finish – a bright two-tone red/yellow sunburst. This remained the model’s only finish option until 1965 when a darker three-tone brown/red/yellow sunburst referred to as “shaded” was offered concurrently.

Although there is no mention of it in Epiphone’s ’66 catalogue or price list, this corresponds with Gibson’s price list the following year, when Sparkling Burgundy appears as a regular/non custom colour option for its thinline double-cutaways.

Aside from finish, Rivieras changed relatively little from 1962 until they were discontinued in 1969. Perhaps the most obvious change occurred in ’63 when headstocks began to transition from the shorter traditional ‘open book’ profile to an elongated design with bevelled edges (standard from 1964).

Another transition began in ’64 when the 1 11/16-inch nut width was decreased to 1 9/16 inches on some models, with examples of both continuing into the following year. In 1965, chrome-plated hardware began to replace the older nickel-plated type, and from ’66, black ‘witch hat’ knobs appeared concurrently with metal cap ‘reflector’ knobs.

Notable Riviera players include Stevie Ray Vaughan and Carl Wilson, who played a 12-string version after it was added to the Epiphone line in 1965. In later years, Jorma Kaukonen and The Strokes’ Nick Valensi boasted their own Riviera signatures.